Despite the polarizing effects of the Dayton Agreement, Bosnian health policy has withstood corruption much better than other sectors (law enforcement, civil service, pensioning, etc.). Recent nation-wide primary healthcare reforms in Bosnia and Herzegovina have helped break down the patterns of ethnic patronage that the Dayton Agreement had generally strengthened. The reforms brought a focus on family healthcare and physician choice that, in turn, broke down the authority of regional bureaucracies. This decentralization gave less power to the ethnically-founded subnational entities – the Republika Srpska and the Federation of Bosnia and Herzegovina – and invested authority to municipal offices. This local authority was further broken down into family practices, typically comprised of one doctor and a pair of nurses (Atun, 28).

Prior to these reforms, Bosnia had suffered an ago-old ailment of ethnic patronage in bureaucracy. Although it did not spread to the physicians themselves (see below), administrators in the healthcare system had, since the Yugoslav era, been selected based on ethnic qualifications rather than merit (Simunovic, 2). This tradition affected which resources went to which district – a factor equal, if not more important than the actual quality of the physician.

Rather than cure the natural tendency towards group patronage, Bosnia’s recent reforms have addressed this problem by cutting the bureaucracy out of the healthcare system as much as possible. Family practices are now supported as the most important unit of primary care (Atun, 30). For day to day health needs, Bosnians can rely on a family physician of their choice. Bureaucratic corruption may persist, but these bureaucrats have less power than before.

The policy had two effects that harmed ethnic patronage in the primary healthcare system. First, it allowed ethnic enclaves to have more control of their own healthcare, even if a different ethnic group ran the government. Given Bosnia’s demographic map, this development would be especially advantageous in the Croat cantons of the Federation (see Institutions for more detail). Although Bosniaks represented a majority of the Federation’s population, the majority-Croat cantons to the east would not need to worry about Bosniak administrators in Sarajevo diverting primary care resources from Croat regions. In the Federation, the canton would have more authority than the parliament.

The granularity of the policy’s primary care structure ensured that, even in one ethnic group’s municipal territory, as long as an enclave was large enough to support one family practice, the group would not need to worry about institutional discrimination. This would be especially important for minorities in the Republika Srpska, where every municipal entity has a majority Serb population. 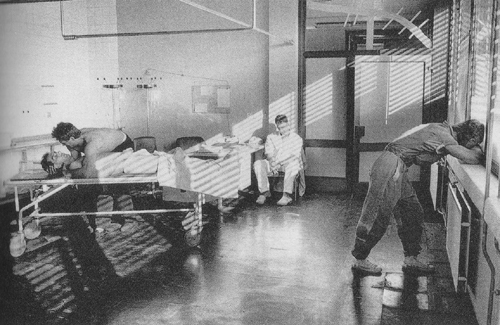 Bosnian hospitals are not strangers to tradegy (image courtesy of lightstalkers.org).

Many different plights arrived in Bosnia after the war. Thankfully, physician corruption was not one of them. Titoist Yugoslavia enjoyed a healthcare system that, although perhaps not the world’s most efficient, carried out its duties without corruption. Physicians were respected and well-paid; dispensing patronage was not in their best interests (Simunovic, 2). A patient was a patient, whether Bosniak, Croat, or Serb. Doctors, as employees of the state, would not last long if they denied or botched treatment based on an ethnicities that were ideologically less important than Yugoslavism. Advancing into the healthcare administration required political savvy and the right lineage, but at the physician level service outpaced corruption (Simunovic, 3).

War could have easily set this healthcare tradition off-track. However, during the Bosnian War the country was more worried about having doctors than weeding out corruption (Simunovic, 3). Foreign aid filled the vacuum left by fleeing doctors, and these visitors were no more corrupt than the physicians they replaced.There was a drawback. however. Western doctors charged hefty sums for their services (Simunovic, 5).

As costly as Western replacements were, they did bring in a high caliber of physician to war-torn Bosnia. The presence of Western healthcare in the country helped Bosnia raise better physicians of its own. When national reforms reorganized Bosnian healthcare along family practices (as summarized above), Bosnians were in the hand of stronger doctors than before. And thanks to the marginalization of the corrupt bureaucracy, Bosnians of different demographic groups did not need to worry about their race preventing treatment.

Health in Bosnia and Herzegovina – A Comparative Perspective

Bosnia’s demographic situation – so often a liability – appears to be an asset when it comes to healthcare. Because the country is inhabited by three large minority groups without one majority, it is difficult for one group to “fall by the wayside” unnoticed. Due to the ethnic homogeneity of the Republika Srpska and the canton system of the Federation (see Institutions), each constituent group has a method of voicing its grievances in a governmental unit it controls (OECD, 4).

In Rwanda, correlations between race and health appear to be caused by the Tutsi people’s traditional concentration in cities (Song, Health). Although the same health disparity does not exist in Bosnia, the system under the Dayton Accords has led so some political divergence between Serbs in the Republika Srpska and Bosnians in the Federation (see Preference Policies for a full overview). Due to the luxury of homogeneity, the RS operates more cleanly than the FBiH; this accomplishment has added to the political capital of Bosnian Serbs on the international stage (Cen­tre for East­ern Stud­ies 12(109), 3). Although studies have not noted a divergence in health yet, with time the RS may surpass the FBiH enough that Serbs enjoy the same improved health as Tutsi in Rwanda..

The challenges for aboriginals in Canada may stem the Canadian healthcare being unable to reach the periphery on which such groups live (Chen, Health). In Bosnia, true minority groups are negligible and, at least by outside observation, mesh comfortably with Bosnian society (even if they are sidelined politically) (US State Department, 2008 International Religious Freedom Report).

Health issues in the Dominican Republic rise from the influx of Haitians into the country (Vargas, Health). Haitians may arrive of their own accord (pregnant mothers have a lower survival rate in Haiti) or through sex trafficking. Since the Bosnian War, human trafficking has plagued Bosnia (US State Department, 2010 Trafficking in Persons Report). Unfortunately, evidence suggests that Western peacekeepers have not only covered up this plight, but also been complicit in executing it (Vulliamy, The Guardian). Moreover, the burden of human trafficking falls more upon gender lines than racial lines as in Haiti.

Bosnia does not need to deal with the same “health tourism” problem that the Dominican Republic does simply because no smart health tourist would come to Bosnia. Even if the country is at peace, it is by far the least stable of its neighbors. Rampant immigration is the least of Bosnia’s concerns – between 1989 and 2004 Bosnia lost 14.7% of its population (International Organization for Migration, 15). Croatia was the most popular destination (!OM, 16). The lack of substantial immigration makes it difficult to draw comparisons between health in Bosnia and France, which does not officially recognize race but still collects data on immigration (Renfro, Health).