We built a tricycle that used three rolls of tape as wheels and wooden dowels as axles. One DC motors powered a cardboard fan that pushed the tricycle. We consider the prototype a success, but it definitely is not the most efficient mode of transportation! We tried to keep the tricycle as compact as possible, as weight played a very large part in its motion. 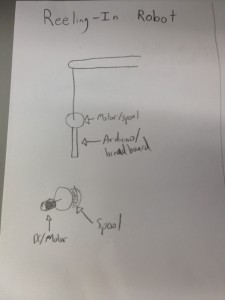 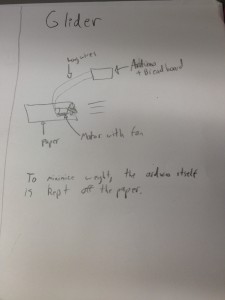 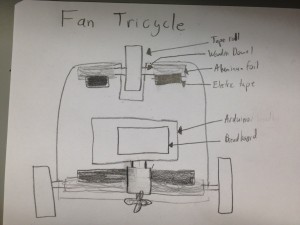 – 3 rolls of tape of roughly the same diameter

– Cardboard, cut into hubs for the wheels, a base for the car and for the fan

– Aluminum foil, to hold the axles in place

– Tape, to keep everything together

– Cut out the cardboards so you have sturdy hubs for the wheels of tape and so you have a comfortable base for your tricycle.

– Fit the cardboard into the tape rolls and use the wooden dowels as axels. Tape aluminum foil to the base so that the axles can still rotate within the foil, but still keep the base up.

– Choose the smallest breadboard possible (to conserve weight), and use the diode/transistor/resistor to connect the DC motors to the fan on the base.

– Secure the arduino and breadboard on the base with tape.

– Turn on the robot and watch it move (slowly)

In the final version, we ended up separating the breadboard from the rest of the car to make it lighter.