In this lecture we consider the unconstrained minimization of a function

that satisfy the following requirements:

We first prove a lower bound on the best possible dimension-uniform rate of convergence one can obtain for smooth convex functions.

, there exists a function

Proof: Without loss of generality we assume that

be the canonical basis of

be the symmetric and tridiagonal matrix defined by

It is easy to verify that

We consider now the following

Similarly to what happened in the proof of the oracle lower bound of the previous lecture, one can see here too that

must lie in the linear span of

(because of our assumption on the black-box procedure). In particular for

. In other words, if we denote

then we just proved that

Thus it simply remains to compute the minimizer

, its norm, and the corresponding function value

is the unique solution in the span of

. It is easy to verify that it is defined by

. Thus we immediately have:

. The first key observation is the following lemma which shows that a smooth function (not necessarily convex) is ‘sandwiched’ between two quadratic functions.

Proof: If the function

was convex one could use the definition of subgradient, Cauchy-Schwarz inequality and

A slightly more clever proof applies Cauchy-Schwarz ‘continuously’, which improves the constant and also get rid of the convexity condition. The key idea is to represent the quantity

as an integral, this gives:

Note that in fact it can be showed that

-smooth if and only if for any

and this inequality is often used as a definition. (The fact that the above inequality implies

-smoothness follows from Lemma 2 below.)

The next lemma shows that for smooth convex functions the basic inequality for subgradients can be improved.

be a convex and

Proof: The proof is quite clever. Let

a the minimizer of 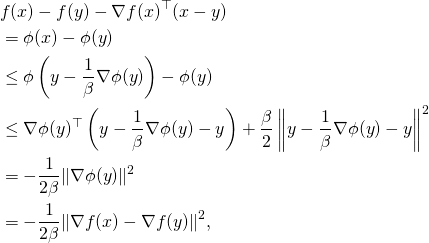 We can now prove the following result.

satisfies (i)-(ii)-(iii). Then Gradient Descent with

Note that here the step-size is much larger than for the Projected Subgradient Descent. This makes sense since for smooth functions one can ‘trust’ the size of the gradient to be a good indicator of how big of a step one can make (this is definitely not the case for non-smooth functions!). Also remark that the decision point is simply the last point visited, again in contrast with what happened for Projected Subgradient Descent.

Proof: Using Lemma 1 and the definition of the method one has

Of course one also has by convexity

We will prove that

, which with the two above displays will imply

Let us see how to use this last inequality to conclude the proof. Let

The last inequality concludes the proof since by

-smoothness (and Lemma 1) one has

Thus it only remains to show that

We use this as follows

On the contrary to what happened in the non-smooth case, here the gradient descent idea does not attain a rate that matches the lower bound (

). In the next lecture we will see how to fix this situation and we will derive a highly non-trivial algorithm with a

This entry was posted in Optimization. Bookmark the permalink.

One Response to "ORF523: Oracle complexity of smooth convex functions"