Today I’m going to talk about a variant of Mirror Descent invented by Nemirovski in 2004 (see this paper). This new algorithm is called Mirror Prox and it is designed to minimize a smooth convex function

over a compact convex set

. We assume that the smoothness is measured in some arbitrary norm

, precisely we assume that

be a mirror map on

. Mirror Prox is described by the following equations: 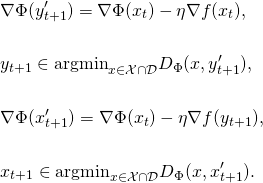 , and then it makes a similar step to obtain

but this time using the gradient of

). The following result justifies the procedure.

be a mirror map

. Then Mirror Prox with

-smoothness, and the fact

Thus summing up these three terms and using that

and this inequality is also true for

(see the bound for the first term). The proof is then concluded as usual.

Following the generalization of Mirror Descent for Saddle Points (MD-SP, see this post) one can propose a version of Mirror Prox for Saddle Points (MP-SP). In fact the importance of Mirror Prox lies primarily in its application to compute the saddle point of a smooth convex-convave function. Indeed, the key observation is that many non-smooth convex functions admit a smooth saddle-point representation (see examples below). With such a representation one can then use MP-SP to obtain a rate of convergence of order

, despite the fact that the original function is non-smooth! Recall that we proved that for non-smooth convex functions the optimal black-box rate is of order

. However MP-SP is not a black-box method in the sense that it makes use of the structure of the function (by representing it as a saddle-point). Nonetheless MP-SP still enjoys the nice time-complexity property of black-box methods since it is a first-order method. It is a win-win situation!

be a compact and convex set endowed with some norm

and a mirror map

be a compact and convex set endowed with some norm

and a mirror map

be a continuously differentiable function such that

is concave. We assume that

-smooth in the sense that:

We consider the mirror map

be defined by the following equations (with

(with similar definition for

. Then SP Mirror Descent with

with the norm defined by

It is immediate that

-strongly convex with respect to

. Furthermore one can easily check that

and thus the vector fields

It suffices now to use the exact same proof than for the standard Mirror Prox starting with:

Assume that the function

to be optimized is of the form:

-Lipschitz in some norm

is equivalent to finding a saddle point over

Thus we are looking for the saddle point of

which is convex in

, and concave (in fact linear!) in

. Thus a rate of convergence (to the minimizer of

-space has to be done with the negative entropy). Note that is rate is particularly striking since the oracle lower bound of

was proved precisely for this type of function! Here we are able to get around this lower bound by making use of the structure of the function. Remark also that if you think about what this algorithm is doing to optimize the function

you get a very very elegant procedure for which it is highly non-trivial a priori to prove something about its rate of convergence.

Finally note that if

and optimizing over the values of

Another interesting example arises when

-norm on both spaces it is easy to see that

(the entrywise max norm), and of course

. Thus we obtain here a convergence rate of order

by considering the mirror map

and optimizing over the values of

Many more interesting examples can be derived and we refer the reader to the original paper of Nemirovski as well as this book chapter by Juditsky and Nemirovski.

This entry was posted in Optimization. Bookmark the permalink.