As promised at the end of Part I, I will give some intuition for the Bach and Moulines analysis of constant step size SGD for least-squares. Let us recall the setting. Let

be a pair of random variables with

be the convex quadratic function defined by

Observe that, with the notation

(in particular this implies

. For instance these assumptions are respectively satisfied with

. Recall that constant step-size SGD on

is defined by the following iteration (where

is a sequence of i.i.d. copies of

Our goal is to show that for

one has (for a sequence

Decomposition into a noise-free SGD and a pure noise SGD

) one can write an iteration of SGD as

In other words the convergence analysis decomposes into two terms:

The analysis of the noise-free SGD is the usual drill: let

(recall that in the noise-free case one has

which finally yields (by convexity of

Thus from now on we can restrict our attention to the pure noise case, and the goal is to show that in this case one has

The pure noise case is the difficult part in the proof (this was to be expected, indeed in the SGD analysis 101 one usually cancels the effect of the noise by taking a very small step size). For this case Bach and Moulines (following the footsteps of Polyak and Juditsky [1992]) suggest to first study a “full gradient” method, that is to replace the term

in the SGD iteration. More precisely the “full gradient” analysis would amount to study the sequence

(recall that we are in the pure noise case and thus

will manage to stay pretty close to the optimum since we are doing full gradient steps, and thus it should only suffer the inherent variance of the problem (recall that the statistical lower bound for this problem is

). It is actually easy to prove that this intuition is correct, first note that 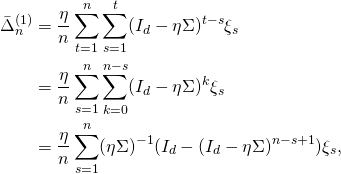 is centered, and also recall that

Difference between full gradient and SGD

Let us now see how different is the sequence

from our real target

In words we see that the difference between the two sequences satisfy exactly the same recursion as SGD, except that the noise term

. This is pretty good news since we expect

to be of order

is a full gradient method starting from

, so it should stay close to

up to the noise term

; again this intuition is easy to make precise since with (X) one sees easily that

. In other words while

corresponds to SGD with noise

(the covariance of this noise is bounded by

corresponds to SGD with noise

(now the covariance of this noise is bounded by

). Thus we see that the new noise term is a factor

smaller. In particular we expect to have

Not quite there but close

So far we have obtained for the pure noise case:

is not close enough to

. Morally the above shows that

can be viewed as a

, with a remainder term of order

. What about continuing this expansion of

as a polynomial in

? Let us see what the next term

and thus (1) rewrites as

In fact there is no reason to stop there, and for any

for a positive number such that the covariance matrix of

, one gets with the same arguments as above

In particular to conclude it suffices to show that

is geometrically decreasing. In fact an easy induction shows that one can take

(we already did the base case

That’s it for today. In part III I will discuss how to use random projections to speed up computations for least squares in both the large sample regime

and in the high-dimensional regime

This entry was posted in Machine learning, Optimization. Bookmark the permalink.