Digitizing The Subway Sun and The Elevated Express 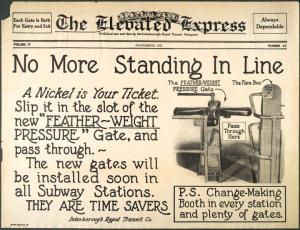 “No More Standing In Line”, “New Tunnel to Brooklyn”, “The Shrunken Nickel”…These are a few of the headlines in The Subway Sun and The Elevated Express which passengers read while riding on subway cars or elevated trains of the Interborough Rapid Transit Company, New York City’s first subway system, in the early twentieth century. A collection of 385 subway posters from the Interborough Rapid Transit Company has been digitized and is available on the Princeton University Library Digital Collections website: http://arks.princeton.edu/ark:/88435/ns064606d The original prints are a part of the Ivy Lee Papers housed and maintained at the Seeley G. Mudd Manuscript Library. The posters document developments in New York City transit and make a part of early advertising history available online.

The Interborough Rapid Transit Company, also known as IRT, opened in 1904 in New York City. In 1916, IRT hired Ivy Ledbetter Lee, a leading public relations specialist and member of the Princeton Class of 1898, to promote the company over its new competitor, the Brooklyn-Manhattan Transit Company (BMT). Central to the advertising campaign were two series of posters called The Subway Sun and The Elevated Express, which appeared concurrently. The posters implemented Ivy Lee’s innovative advertising philosophy to educate and inform by communicating directly with passengers, and to present facts and statistics instead of rhetoric. Several of the early posters are messages from IRT President Theodore P. Shonts. The message titled “Coal for Your Service” (1919) provided exact figures showing an 84 per cent increase in the cost of coal from 1916 to 1919. Other posters addressed pressing issues such as the rise in operating costs, congestion, and the need for a fare increase. In “All other prices have been going up” from 1925, a graphic by illustrator C.E. Millard depicted the rising price of food, rent, materials and wages in opposition to the static five-cent subway fare. 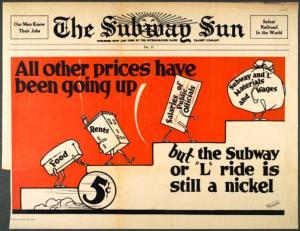 Marketed as “The World’s Safest Railroad”, IRT often publicized safety and the development of time and labor saving devices. “No More Standing In Line” (1921) featured the new “Feather-Weight Pressure” Gate, which reduced the time spent waiting in line at the gates and the need for extra booth operators. Another issue, “Fire Proof” (1921), informed passengers that every part of the subway was fireproof from the subway cars to the stairs.

The series began in 1918 and lasted until the company’s decline in 1932, spanning major U.S. events such as World War I and the Great Depression. The third issue of The Subway Sun, titled “The Call to War” (1918), included a public service announcement notifying every man between the ages of 18 and 45 that he must register for the Draft. The posters also served as a way of announcing service changes or travel tips and of promoting New York City’s local attractions. The series called “Time Savers” (1925) provided maps with routes that helped passengers avoid delays of street traffic. “Ride on the “L” and See New York” (1929) encouraged riders to enjoy the fresh air and sunlight on the elevated trains while viewing the sites of the City.

To learn more about the IRT Subway Posters, listen to the Online Gallery Talk – 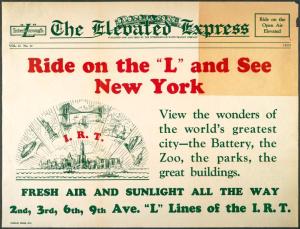