The following materials were accessioned in February and March this year. As always, anyone interested in additional information about the new materials should contact the library through our general email account mudd@princeton.edu

Among the new accessions to the University Archives is an issue of Old Nassau (pictured below), which was likely the personal copy of Jimmy Stewart ’32 (accession number AR.2009016). Following his death in 1997, Stewart’s estate donated a large number of the actor’s books to the Friends of the Beverly Hills Library to be sold in their used book store. The wife of Kenneth Goldman ’64, a volunteer at the book store, spotted the volume and purchased it for her husband.

Kenneth Goldman donated the book to the University Archives this spring. Published in 1905, the limited edition book tells the story of Princeton’s anthem. It includes an autobiography of Karl Langlotz (composer of the music for Old Nassau); biographical information about Harlan Page Peck, Class of 1862 (author of the song’s lyrics); various musical arrangements for the song; as well as information about Princeton in the years 1858 through 1862. The pages below show Peck’s lyrics, which were first published in the Nassau Literary Magazine in 1859. 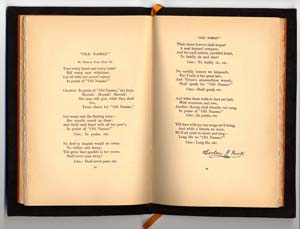 Additional information can be found on the finding aid for the Old Nassau Collection at the Mudd Manuscript Library http://arks.princeton.edu/ark:/88435/rb68xb85k; and on the Princetoniana Committee Web page “Old Nassau, History of the Song” http://tigernet.princeton.edu/~ptoniana/oldnassau2.asp.

A complete list of materials accessioned in February and March follows.