In January, the University Archives acquired a lecture notebook penned by Elijah Rosengrant (1776-1832). The notebook was written in the spring of 1791 for John Witherspoon’s course "Lectures on Moral Philosophy." The significance of the notebook derives not only from its documentation of President Witherspoon as a faculty lecturer and of the pedagogical technique of the college in the 18th century, but also from the fact that Elijah Rosengrant was not enrolled as a student in the College of New Jersey (as Princeton was then known). In fact, Rosengrant was a student of Queen’s College (now Rutgers University), Class of 1791, in New Brunswick, New Jersey. 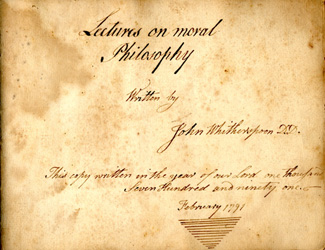 Although Princeton University’s collection of Dean of the Faculty Records covers the period that Rosengrant attended Princeton, there is no reference in the records to non-Princeton students attending lectures, nor are there formal lists of students’ attendance. In fact, the faculty meeting minutes during this period are quite preoccupied with discipline issues. Another collection that documents this period is the Board of Trustees Records; however, this collection also does not provide information relevant to Rosengrant.

Erika Gorder, Associate University Archivist at Rutgers University, explained that 1791 was a tumultuous time for Queen’s College. The college’s first president, Jacob Rutsen Hardenbergh, passed away in 1790, and John Taylor, who was responsible for a significant proportion of the teaching duties, departed the college. This lacuna in leadership may have led to Rosengrant’s attendance at Princeton in the spring of 1791. Moreover, Witherspoon’s lectures on moral philosophy were traditionally given to students during their senior year. This course augmented Rosengrant’s study at Queen’s College, if it did not actually fulfill requirements for his undergraduate degree. 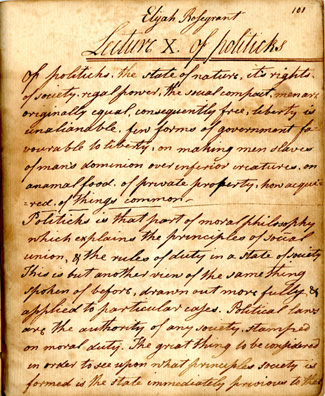 The lecture notebook has two volumes. The first is dated February 9, 1791, and the second volume, “Part II,” is dated March 3 of the same year. The individual lectures are not dated, but simply listed as “Lecture 1st” and “Lecture 2nd”, etc. Of the 15 total lectures in the two volumes, Rosengrant recorded nine lectures between February 9 and March 3. This would indicate that lectures were given at the frequent pace of three times per week. The question remains whether Rosengrant boarded with fellow students in Nassau Hall or roomed locally in Princeton. Given the distance between Princeton and New Brunswick (roughly 34 miles round-trip) it seems unlikely that he could have traveled by horseback or coach three times per week to attend lectures.