The Mudd Manuscript Library has finished the first phase of an NHPRC-funded project to process the most recent records of the American Civil Liberties Union. After an extensive survey, we have a record of the contents of each of the 2,461 boxes. This is an increase of nearly 500 linear feet of materials from what we had initially estimated would be included in the project. To put that in perspective, instead of a project the length of 5.5 football fields, it is closer to 6.8 football fields. Many of the additional materials are case files and project files, but there is also a significant increase in the number of organizational records. 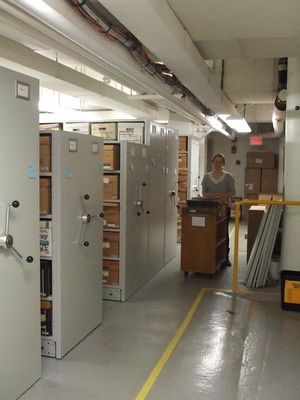 The records will be divided into the six series, closely following the arrangement of the earlier ACLU records to aid researchers in transitioning between the two sets:

The next phase in the project is to create an inventory of the collection, which will be the main tool for researchers to locate relevant documents. Work began in September with the return of the Princeton University undergraduates to campus who will do the actual work of typing the inventories. The able assistants on this project are Jamie LaMontagne (Class of 2011), Brandon Joseph (Class of 2012), and Emma Watt (Class of 2013). Simultaneously, project archivist Adriane Hanson will be reviewing the records for materials that should be restricted due to legal requirements, ensuring that the maximum number of records can be opened at the completion of the project.

Despite the additional linear feet involved, the project is still scheduled to be completed on time in Summer 2012. We will publish a traditional finding aid online to describe the contents of these records and also create a guide to link together the numerous collections related to the American Civil Liberties Union at the Mudd Manuscript Library. In addition to the records for earlier periods in the ACLU’s history, some of these include the personal papers of: