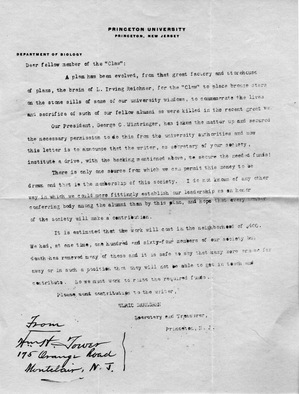 After World War I, the tradition of memorializing fallen students and alumni with bronze stars continued, though funding for the stars has shifted from the Society of the Claw to donors such as the family and friends of each fallen alum. As such, stars now grace the final dorm rooms for those who died in World War II, the Korean War, and Vietnam. The most recent set of stars was installed in 2003, dedicated to the 13 Princeton alumni who died in the September 11 terrorist attacks. These stars, however, were placed in a memorial garden, not on dormitories.

Several years ago, the University’s Office of Development created listings for all the stars commemorating veterans of World War I, Vietnam, and Korea. A listing of fallen World War II veterans exists in a Memorial Book housed at Mudd Manuscript Library, but it does not contain any information about each student’s final dormitories. See http://infoshare1.princeton.edu/libraries/firestone/rbsc/mudd/online_ex/warbook/index.shtml for more details.

Since the compilation of these lists, the location of some stars has changed, with each placard located in the demolished dorms Upper Pyne and Reunion Hall now relocated to West College. (See https://paw.princeton.edu/article/editor-20).

As a final note, the campus stars have been covered extensively in various campus publications. To learn more about the bronze memorials stars, you may wish to examine the following sources:

Special thanks to Amanda Hawk and Dan Brennan, who compiled much of the information reported in this article.