It did not take long after coming to Princeton in 1994 for me to appreciate the importance of Robert Goheen and his place in University history. During his time in the president’s office, the University was transformed physically, socially, and academically and became the modern University it is today. But as I studied the records in the University Archives and came up to speed with his administration’s accomplishments, I had no sense of the man who oversaw this watershed era until one day Goheen visited Mudd Library to conduct research himself.

Expecting an oversize character on the order of Yale’s Kingman Brewster—Goheen’s contemporary who was a caricature in Doonesbury—I found just the opposite. He was a quiet, unassuming man who, if not for knowing his name from the daily log, I would have assumed to be just another of the many senior scholars who visited the library and dutifully went about their work. He did not ask for nor expect any special treatment, nor did his demeanor call attention to himself in any way. I would learn that was the essence of Bob Goheen.

In the coming years, there were a number of occasions where I crossed paths with Goheen, including one spring day when I went to his house to pick up his non-Princeton papers.  Later, Secretary of the University Robert Durkee asked me to conduct a video oral history interview with Goheen with the Alumni Council’s Kathy Taylor serving as producer. The four, hour-long videos here are the result of our efforts, and they document the man’s remarkable 72-year association with Princeton as a student, faculty member, and president.

The first interview, conducted on October 21, 2004, covers Goheen’s early life, his undergraduate, graduate, and faculty careers at Princeton, and his selection as University President at age 37. He also reflects on his mentor, Professor Whitney Oates, long-serving trustee Dean Mathey, his predecessor Harold Dodds, and Freddie Fox. (In each interview, I asked Goheen to discuss various people with whom he crossed paths. He freely admited that recalling specific anecdotes is not one of his strengths, and so these tend to be impressionistic.)   (Read the transcript.)

In the second interview (conducted on October 26, 2004), Goheen discussed the state of the University upon becoming president, the $53 Million Campaign, the growth and allocation of the University budget, coeducation, the eating clubs, and his contemporary Ivy League presidents. Of special note is his discussion of the 1963 Spring riots (15:35) as they related to the civil rights demonstrations in the South.  (Read the transcript.)

In the third interview (November 4, 2004), Goheen discusses coeducation in more detail, campus architecture, the establishment of the Provost’s Office, William Bowen, the growth of the graduate school, and changes in University governance and the Kelley Committee. (Read the transcript.)

The final interview (January 6, 2005) covers the creation of the Council on the Princeton University Community (CPUC), the Vietnam War and campus unrest including the campus strike of 1970, the Board of Trustees, his decision to resign as president, and his life afterwards, including his foundation work and his time as Ambassador to India. (Read the transcript.)

Generally speaking, as an archivist, I am concerned with preserving records, not generating them. But in interviewing Goheen, it was a chance to not only create what I hope will be a useful documentation of his long association with Princeton, it was also an honor and a pleasure.
Dan Linke
University Archivist

The recent debates over wiretapping are not new, as this film “Are Wiretapping Laws Helping Criminals?” demonstrates. Broadcast as an episode of All America Wants to Know, this segment features a debate about an issue that is as relevant to the ACLU today as it was during this 1962 broadcast.

All America Wants to Know was a monthly debate show which focused on current events and legal issues. Presented by The Reader’s Digest and the Freedoms Foundation, this program was created and moderated by Theodore Granik, best known for creating several other radio and television panel discussion programs including “Youth Wants to Know,” “Women Want to Know,” and perhaps most famously, “American Forum of the Air.”

The inspiration for this episode was the March 1962 Reader’s Digest article by Senator Kenneth Keating (R-NY), called “Change the Law that Fosters Crime.” Keating, a long time advocate of expanding federal surveillance powers, was known for having introduced a 1954 bill that sought to allow the FBI and military intelligence services to intercept telephone conversations in national-security cases, as well as Senate bill S. 3340 (86th Congress, 1960), which aimed to make it easier for state law enforcement to place taps.

END_OF_DOCUMENT_TOKEN_TO_BE_REPLACED 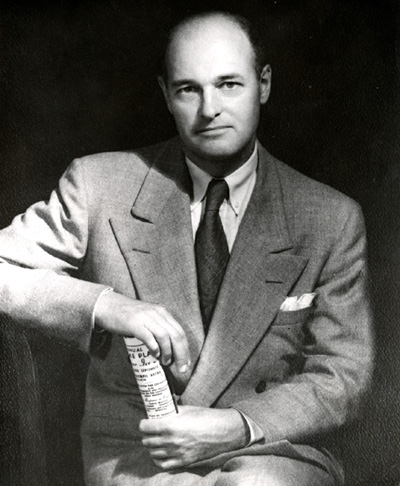 The Mudd Manuscript Library at Princeton University holds the papers of renowned diplomat George F. Kennan (1904-2005); upon the passing of Kennan and his wife, copyright in the unpublished materials in those papers passed to Princeton. Within the more than 300 boxes that make up the collection, twelve boxes contain the diaries that Kennan kept nearly continuously throughout his adult life (they date from 1924-2004).
As Kennan remains prominent in scholarly discourse, there is great interest in these diaries. Several individuals have expressed an interest in publishing them in some form. In order to ensure that they receive the benefit of the best possible treatment, the University is soliciting proposals from all interested scholars and will award one the right of first publication.
The Kennan Papers and Diaries
The Papers are described with a high-level of detail within the Mudd Library finding aid found here: http://arks.princeton.edu/ark:/88435/n009w2294 In addition, within the finding aid, the diaries are described: http://diglib.princeton.edu/ead/getEad?eadid=MC076&kw=Kennan#series4subseriesC
Kennan kept the diaries throughout much of his adult life and they detail his private thoughts on the issues facing him both professionally and personally. Kennan’s authorized biographer, John Lewis Gaddis, has read them all and described their self-critical character as resembling those of Henry Adams. In the diaries, Kennan recorded with whom he was meeting, including brief descriptions of the subject of the conversations, and his professional and personal appointments. The earlier diaries, from the period when he was in the diplomatic service, contain his impressions of the countries and the issues they faced. The diaries from his scholarly career include discussions of his research projects and publications, his travels and speaking engagements, and his opinions on public policy matters. Personal details are also found throughout each volume, with a separate “dream journal” covering the period from 1964 to 1977.
Request for proposals
The Library seeks proposals for the publication of the Kennan diaries that answers the following questions:
Please include a c.v. for all project participants.
Proposals should include contact information for possible follow-up questions. Word or PDF documents sent as email attachments can be mailed to dlinke@princeton.edu. Any supplementary materials that need to be sent via USPS can be mailed to:

All proposals will be confidentially evaluated by a panel of scholars with an understanding of Kennan’s role in 20th century diplomatic history.
Kennan Diaries Project Advisory Committee
Deadline for submission is: May 2, 2011 with an anticipated announcement by August 1, 2011.