Generally ignored or barely noted by Princetonians today, Washington’s Birthday was one of the most important campus events during the late 1800s and early 1900s. The day was marked in a variety of ways such as athletic contests, musical entertainment, and plays. The celebration was capped off by an oratorical contest, where each class selected a representative to compete for a cash prize, usually sponsored by the Nassau Literary Magazine. 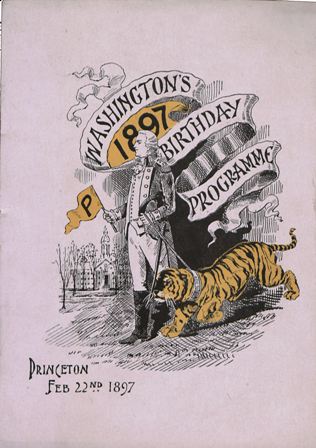 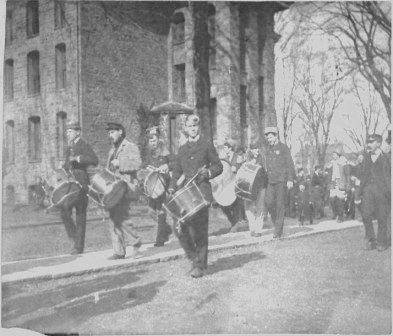 According to Princeton University Secretary Varnum Lansing Collins (Princeton, pp. 386-387), Washington’s Birthday eventually evolved into an "almost painfully solemn" occasion, one that lost its burlesque spirit and class rivalry. This shift in tone may have been influenced by the introduction of the Class of 1876 Memorial Prize for Debate, which sought to supplant the orations with a debate focused on politics. James McCosh announced that the ‘1876 Debate would replace the Washington’s Birthday exercises, though it failed to do so for several years.

Why Washington’s Birthday achieved prominence on campus is unclear, but Washington’s connections to Old Nassau are beyond doubt. As a general, his military accomplishments at the Battle of Princeton are well known, as is his attendance, along with the rest of Congress, at the Commencement of 1783. Peale’s famous portrait of the first President was commissioned by the College of New Jersey’s Board of Trustees, and several of Washington’s relatives, including his adopted son George Washington Parke Custis (non-graduate ‘1799), were Princetonians. Washington was also a College of New Jersey donor, giving 50 guineas to the College to help repair Nassau Hall’s war damage. President Washington’s esteem for Princeton is perhaps best shown in his advice to Custis: “No college has turned out better scholars or more estimable characters than Nassau.”

With the increase in solemnity came a decrease in the student body’s interest, as Washington’s Birthday festivities faded away in the early 1900s. The closest thing to a modern celebration of this event is Alumni Day, held since 1915 on the Saturday closest to the first President’s birthday. 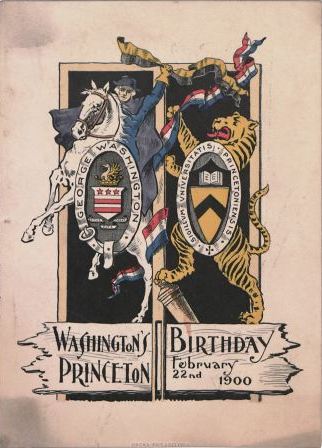 Princeton’s observance of Washington’s Birthday had two last notable peaks. The celebration of 1932 marked the bicentennial of the first president’s birth, and local committees across across the nation held events. Princeton’s committee, chaired by Alexander Phillips and Varnum Lansing Collins, oversaw an especially festive campus celebration. Notable events included a twenty-one gun salute fired by the batteries of the Princeton Field Artillery Unit and the publication of a special Washington focused supplement of the Daily Princetonian.

The 1946 celebration, however, served as more than a presidential party. As the University approached its bicentennial, this occasion featured Princeton’s first post-war commencement, an oration by honorary degree recipient John Foster Dulles, and the dedication of Princeton’s World War II Memorial Book.

Readers interested in learning more about Washington’s Birthday at Princeton may wish to consult the following materials:

Custis, George Washington Parke, Mary Custis Lee,, and Benson J. Lossing. Recollections and private memoirs of Washington by his adopted son George Washington with a memoir of the author by his daughter; and illustrative and explanatory notes by Benson J. Loosing. New York: Derby & Jackson, 1860.http://books.google.com/books?id=PkE6AAAAcAAJ&pg=PA94&dq=%22No+college+has+turned+out+better+scholars+or+more+estimable+characters+than+Nassau&hl=en&ei=CLL_TPOAMYSclgeT0ND4CA&sa=X&oi=book_result&ct=result&resnum=6&ved=0CEAQ6AEwBQ#v=onepage&q=%22No%20college%20has%20turned%20out%20better%20scholars%20or%20more%20estimable%20characters%20than%20Nassau&f=false.

“When Washington’s Son Was at Princeton.” Princeton Alumni Weekly, March 2, 1901.

Jimmy Lu ‘2013 and Liz Parsons ‘2011 contributed to the research of this article.

2 thoughts on “Washington’s Birthday at Princeton”