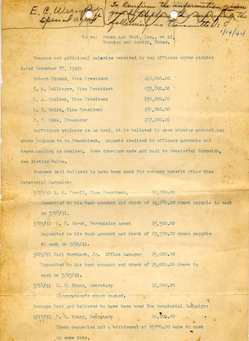 As Caro explains, in February of 1944, just as the investigation was gaining steam but before the agents had an opportunity to question key Johnson campaign staff, the IRS Chief of Intelligence instructed the agents to halt the investigation. In the end, Brown & Root received only a slap on the wrist in relation to their probable transgressions.

On June 28, Werner submitted his final report on Case S.I.-19267-F, showing tax deficiencies of $1,099,994 and a penalty of $549,972. But even this was to be scaled down. After a series of further conferences between IRS officials and [Alvin] Wirtz [Johnson’s close colleague and attorney for the defense], Brown & Root were ultimately required to pay a total of only $372,000. There were of course no fraud indictments, no trial, no publicity. (Caro 753)

The rest of the chapter is equally intriguing, as Caro explains the exact nature of Brown & Root’s financial maneuvers and Johnson’s interactions with the Roosevelt White House. However, Caro did not at the time have access to the 1944 and 1945 diaries kept by Werner, which are now part of Mudd’s collections. These diaries may provide more fruitful information for a future researcher.

More information about this collection, MC253, can be found on the Princeton University Finding Aids Website.