Superbowl Sunday is once again upon us. As we head toward the “Big Game” you can’t help but think back to when intercollegiate football gained its beginnings right here in Princeton.

In the book A Princeton Companion author Alexander Leitch notes that the first American intercollegiate football game was played between Princeton and Rutgers in New Brunswick on November 6, 1869.

The Princeton University Archives, housed at Mudd Manuscript Library, contains a treasure trove of memorabilia, photographs and programs from the early days of Princeton football. 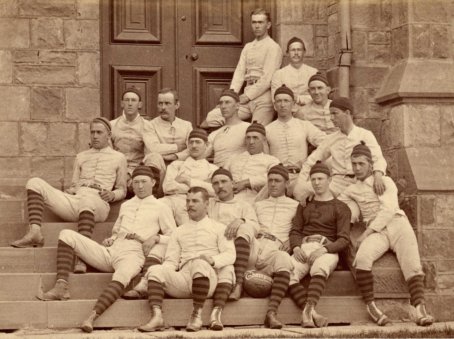 Princeton football team from 1879.
A Souvenir Programme from the Princeton-Pennsylvania Foot-Ball Game from November 5, 1892 gives a description of the game. See the transcript below. 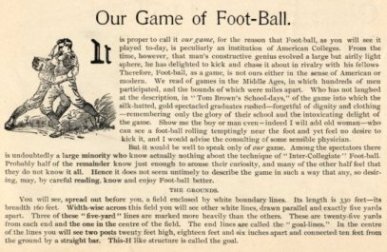 “Our Game of Foot-Ball” from a Souvenir Programme dated November 5, 1892.

Transcript:
Our Game of Foot-Ball.

It is proper to call it our game,for the reason that Foot-ball, as you will see it played to-day, is peculiarly an institution of American Colleges. From the time, however, that man’s constructive genius evolved a large but airly light sphere, he has delighted to kick and chase it about in rivalry with his fellows. Therefore, Foot-ball, as a game, is not ours either in the sense of American or modern. We read of games in the Middle Ages, in which hundreds of men participated, and the bounds of which were miles apart. Who has not laughed at the description, in “Tom Brown’s School-days,” of the game into which the silk-hatted, gold spectacled graduates rushed-forgetful of dignity and clothing-remembering only the glory of their school and the intoxicating delight of the game. Show me the boy or man even – indeed I will add old woman – who can see a foot-ball rolling temptingly near the foot and yet feel no desire to kick it, and I would advise the consulting of some sensible physician. But it would be well to speak only of our game. Among the spectators there is undoubtedly a large minority who know actually nothing about the technique of “Inter-Collegiate” Foot-ball. Probably half of the remainder know just enough to arouse their curiosity, and many of the other half feel that they do not know it all. Hence it does not seem untimely to describe the game in such a way that any, so desiring, may, by careful reading, know and enjoy Foot-Ball better.

THE GROUNDS
You will see, spread out before you, a field enclosed by white bouandry lines. Its length is 330 feet — its breadth 160 feet. Width-wise across this field you will see other white lines, drawn parallet and exactly five yards apart. Three of these “five-yard” lines are marked more heavily than the others. These are twenty-five yards from each end and the one in the centre of the field. The end lines are called the “goal-lines.” In the centre fo the lines you will see two posts twenty feet high, eighteen feet and six inches apart and connected ten feet from the ground by a straight bar. This-H like structure is called the goal.

THE TEAMS
If you are properly enthused, you will experience considerable excitement when the teams come on the field about two-fifteen. Until the game is called there will be about twenty men at each end of the field, warming up by passing the ball, falling on it and kicking it. When it is time to play, however, eleven only of each side strip off their sweaters and assemble at the middle of the field. The conventional method for these men to line up on ordinary plays is as follows: Seven of them, called “Rushers,” stand in line to protect he “Backs,” who are the other four men. Of the Rushers, the man in the middle is known as the Centre Rush, and is the man to put the ball in play. On each side of him are the Guards – the one on his right being known as Right Guard, the other as Left Guard. The next man on each side is known as a Tackle, and the end men are known respectively as Right and Left End Rush. Of the Backs, the man who plays directly behind the Centre Rush and takes the ball from him when he snaps it back is know as the Quarter Back. The other three backs stand in a line about five yards from the Rushers and are know respectively as Right and Left Half Backs and Full Back.

THE OFFICIALS
Consist of a Referee and an Umpire. The principal duty of the former is to watch the ball – tell to which side it belongs, how many downs it is, how far to gain, and whether the ball has been properly put into play. The Umpire must watch the players – keep them on side, prevent unfair holding, decide with regard to the fairness of interference and prevent brutality by sending from the field all men who strike, kick, throttle or are unnecessarily rough.

THE GAME
When it is nearly time for the game to begin, the Referee calls the two Captains together and, by flipping a coin, determine which team shall have the ball at the kick-off. The Captain who does not get the ball always has a choice of the goals, and usually chooses to defend the one from which the wind is blowing, so that the kicking may be more effective. The Referee now placed the ball in the exact centre of the field, and the team having the kick-off forms itself into the shape of a V, with the apex over the ball and a man standing in the angle to run with it behind the protection of his V. The Referee asks each Captain if he is ready and then shouts, “Play!” The game is now begun and continues an hour and a half, with a rest of ten minutes in the middle.

Above items were found in collections:

For more information about Princeton Football and the University Archives visit the finding aids page of the Mudd Manuscript Library website.

1 thought on “The beginnings of American Football”