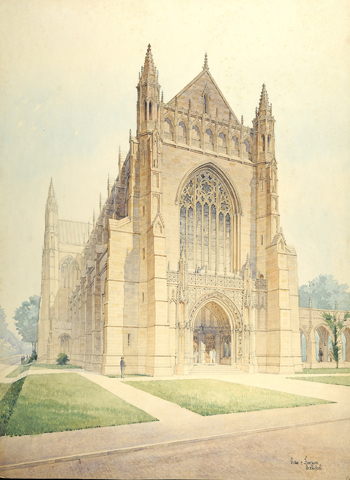 The exhibit includes 10 items loaned from the Princeton University Archives, including the signature image for the exhibition, a watercolor of the University Chapel (above). Other items include architectural drawings of the Marquand Chapel, Holder Hall, Madison Hall and the South Court Tower, and some suggested additions for the university library from 1898, which at that time was housed in Chancellor Green.

One piece needed some intricate and delicate conservation efforts from University Paper Conservator Ted Stanley. A watercolor of the proposed exterior of the A. Page Brown, Class of 1877 Biological Laboratory had split in half. Stanley was able to restore the watercolor and the board it was mounted on to its original form to hide the separation. We challenge you to find the seam!

This is the first time that any of the archives material has been loaned and displayed at the Princeton Art Museum. The exhibit will run from February 25th to June 24, 2012

For more about Princeton and the Gothic Revival: 1870-1930 or the Princeton Art Museum, visit their website.