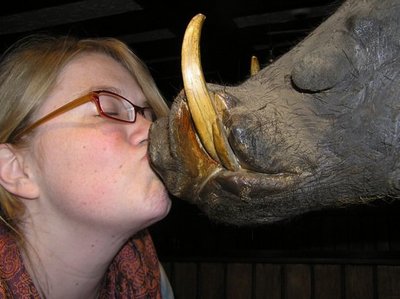 Maureen made fast friends with this warthog who was a part of the hotel where she was staying while working on an archives project at the University of Fort Hare in Alice, Eastern Cape, South Africa.

Title/Duties: My official job title is Public Policy Papers Project Archivist. Like everyone at Mudd, I do a lot of different things, but my main focus is being a good intermediary between the feet, yards, even miles of archival records that we have and researchers who want to come to use them. I spend time figuring out how to describe materials in aggregate and make sense of their context and content. Or, to put it another way, I dig through a lot of dusty stuff so you don’t have to.

I also work with other archivists and librarians here to leverage the tools of a networked world to make our resources available to people who might never be able to come to Princeton to do research. We’re looking at possibilities for mass digitization so that we can put our actual stuff – and not just descriptions of it – on the internet.

Recent projects: Part of the reason why I enjoy my job so much is because I get to do a lot of different things. Dan Linke and I are currently working on an exhibit about the 1912 election – reading about characters like Eugene Debs, Teddy Roosevelt, Woodrow Wilson (and let’s face it, to a lesser extent) William Howard Taft is extremely engaging, and we’re having fun thinking about ways to explain the contexts and parallels of 1912 and today.

Over the summer I processed the papers of Judge Harold R. Medina, a figure so well-known during the 1940s and ’50s that he made the cover of Time magazine, but who is rarely referenced today. Medina presided over the trial of the leaders of the Communist Party, USA, and over a huge anti-trust case against investment banking firms in the early 1950s. After spending quality time with Judge Medina, I would say that there are possibly dozens of articles and dissertations to be written from the content of his records. I hope that we see an uptick in researchers now that his papers are more fully processed!

Worked at Mudd since: I’ve worked at Mudd since February of 2011. Before that, I led a project to digitize rare materials from the Middle East and North Africa at George Washington University, and previous to that I was an archivist at the Penn Museum.

Why I like my job/archives: Well, at an esoteric level, I believe that an honest look at the historical record tends to destroy previous conceptions of what is normal, and I think that there’s something extremely liberating about this. Even Mudd’s records of fairly mainstream characters have the power to challenge my previous conceptions of how power presents itself, how people behave, and how the nation operates.

Much more concretely, I like working with people and I like working with technology. We get a lot of questions that start with "my ancestor went to Princeton. Can you tell me about him?" I appreciate the chance to connect people with the people who came before them, and sometimes surprise them with the richness of our records. This process is rewarding, and I’m optimistic about the capabilities of the web to bring our resources to more people.

Favorite item/collection: I’m not sure if it’s my favorite, but last year we accessioned the records of Elmer C. Werner, an IRS agent who had the goods on Halliburton’s (well, the group that existed that eventually became Halliburton) illegal contributions to Lyndon Baines Johnson’s senate campaign. I wrote a blog post about it, which tells the whole sordid story: