In our ongoing efforts to provide digital access to our records, we are happy to announce two additional collections have been digitized with the help of our students.

The Robert Lansing Papers and the John Foster Dulles State Department Records are viewable via their finding aids.

The two collections took a little over six months to complete.

For this project, we asked students who worked at the library’s front desk to scan documents by using a top feed and flat bed scanner when not assisting patrons. Once scanned, students would combine files together using Adobe Acrobat Pro.

While we continually work in house to make more of our collections available online, recently we also have been awarded a grant to have six other collections digitized. Read more about those collections and the project here: 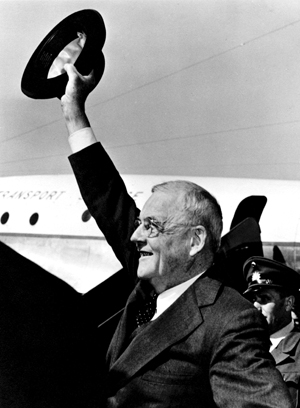 “John Foster Dulles: From Diploma to Diplomat,” a new exhibition at the Seeley G. Mudd Manuscript Library, celebrates the centennial of John Foster Dulles’ graduation from Princeton University in 1908 with a chronicle of his diplomatic career and his influence on U.S. foreign policy. The exhibition opens Monday, Aug. 11, and runs through Friday, Jan. 30.

Based on the life and work of Dulles (1888-1959), it begins with his work while still a Princeton student as secretary-clerk of the China delegation at the Second Hague Peace Conference in 1907 and culminates with his service as secretary of state for President Eisenhower from 1953 to 1959.

Drawing predominantly from the John Foster Dulles Papers, as well as other related Mudd Library collections, the exhibition tracks his diplomatic career that spanned both World Wars and the Cold War. As a young diplomat, Dulles participated in the Treaty of Versailles negotiations after World War I. Following his involvement in studies on fostering world peace during the 1940s, he also served as the U.S. representative to the United Nations and negotiated several treaties for President Truman, including the Japanese Peace Treaty of 1951 which formally ended World War II. As Eisenhower’s secretary of state, Dulles ushered in a period of hard-line diplomacy that shaped both the country’s relationship with the Soviet Union and overall Cold War doctrine.