In this week’s installment of our recurring series bringing you the history of Princeton University and its faculty, students, and alumni, John Maclean defends the expulsion of students, Quadrangle Club opens, and more.

September 15, 1870—James McCosh interrupts a brawl between sophomores and freshmen on Nassau Street over canes with a shout of, “Disperse, young men, or the bailiffs will be after you.”

September 16, 1861—John Maclean writes to the editor of the New York Evening Post to explain the unpopular decision to expel some students from Princeton for attacking another student who had expressed sympathy for the Confederacy: The faculty “will not permit the utterance of sentiments denunciatory of those who are engaged in efforts to maintain the integrity of the national government; nor will they allow of any public expression of sympathy with those who are endeavoring to destroy the government,” but “it must be evident that the Faculty could not permit his fellow-students to take the law in their own hands…”

END_OF_DOCUMENT_TOKEN_TO_BE_REPLACED

In this week’s installment of our recurring series bringing you the history of Princeton University and its faculty, students, and alumni, the Graduate College remains in control of the U.S. Navy following the end of World War I, the local pastors association prays for their colleagues involved in the Civil Rights Movement, and more.

February 27, 1981—Three students who won election to Undergraduate Student Government as members of the joke group “Antarctica Liberation Front” on a platform of “jihad” against the Hun School of Princeton resign after only one USG meeting.

END_OF_DOCUMENT_TOKEN_TO_BE_REPLACED

In this week’s installment of our recurring series bringing you the history of Princeton University and its faculty, students, and alumni, frozen pipes make bathing impossible, the campus celebrates the issuing of a new postage stamp for Chinese New Year, and more.

February 5, 1822—John Maclean, a tutor at the College of New Jersey, catches a student lighting the fuse of a bomb in an entry to Nassau Hall, stomps it out, and saves the building from damage.

February 8, 1877—Because the gymnasium’s water pipes have frozen, using the campus’s only bathtubs will have to wait until the spring thaw.

END_OF_DOCUMENT_TOKEN_TO_BE_REPLACED

In this week’s installment of our recurring series bringing you the history of Princeton University and its faculty, students, and alumni, a graduate receives his second Nobel Prize, a Native American member of the Class of 1762 complains of “too much confinement” in Nassau Hall, and more.

December 10, 1972—John Bardeen *36 accepts his second Nobel Prize in physics and becomes the only two-time laureate in the same field.

To honor of the accomplishments of John Bardeen *36, Princeton University chose him as the first recipient of the James Madison medal in 1973. Note that the graduation year on the medallion is incorrect. Bardeen earned his Ph.D. in 1936, not 1939. Princeton University Memorabilia Collection (AC053), Box E-1. Photos by April C. Armstrong.
END_OF_DOCUMENT_TOKEN_TO_BE_REPLACED

Today marks the 150th anniversary of the end of Civil War, a conflict that had implications for every facet of American life. The “unhappy condition of the country,” as the College of New Jersey (Princeton) President John Maclean described it in 1861, had a profound impact on the school. Here we highlight the mass exodus of southern students from Princeton, as well as some of the emotional toll the war took on alumni of the era.

Though located in Union territory, Princeton had the reputation of being the “most southern of all the northern colleges,” due to its significant number of wealthy southern students. Relationships across the Mason-Dixon were strong at Princeton. Edwin Mark Norris later wrote of this period, “When it became apparent that, faithful to their convictions, the students from opposing sections would soon be opposing each other in arms, rather than merely in argument, the friendships formed beneath the elms became even more closely cemented, and it was with genuine sadness that these intimate ties were severed” (The Story of Princeton, 186). This inscription on Bazil F. Gordon’s senior portrait sums it up: a student on the other side was “your true friend and enemy.”

END_OF_DOCUMENT_TOKEN_TO_BE_REPLACED

In this week’s installment of our ongoing series bringing you the history of Princeton University and its faculty, students, and alumni, a dorm thief is caught, a movie about an alum premieres in town, and more.

December 22, 1898—A granite monument in Arlington National Cemetery at the grave of Major General William W. Belknap, Class of 1848 and former Secretary of War under Ulysses S. Grant, is presented to the U.S. government.

Photo taken in Washington, D.C. at what the caption describes as “a chance meeting of Bradley M. Thomas (Class of 1849), George Alexander Otis (Class of 1849), Alfred Alexander Woodhull (Class of 1856), Princeton President John Maclean (Class of 1816), and Gen. William Worth Belknap (Class of 1848).” Belknap is on the bottom left. Historical Photograph Collection, Campus Life Series (AC112), Box SP1, Item No. 4599.

December 23, 1952—A young man recently expelled from Harvard University’s English Ph.D. program who had been going into Princeton dorms and stealing a variety of student possessions is apprehended by a University proctor. At the time, he was wearing shoes he had stolen from a dorm room. The Mercer County Court will later send him to the Menlo State Insane Asylum.

December 24, 1915—University president John Grier Hibben and his wife invite any students still on campus to have dinner in their home.

December 25, 2001—A Beautiful Mind opens at the Garden Theatre, four days before being shown nationwide. The movie, filmed on the Princeton University campus, is loosely based on Sylvia Nasar’s biography of John Nash *50 by the same name.

A collection of John Maclean’s papers are now available online. Maclean, the 10th president of Princeton University, served from 1854-1868 when the institution was known as the College of New Jersey. The letters, acquired last year, were scanned and loaded as PDFs and linked to the collection’s finding aid via its folder list. These letters to and from John Maclean document the history of the College of New Jersey as well as family matters. Maclean was the son of Princeton’s first chemistry professor, and the papers include the 1814 inventory of the estate of his father, John Maclean, Sr. One of the more interesting documents provides evidence of New Jersey’s connections to slavery. See the last two entries of p. 3 of this inventory, found in Box 4, Folder 11. 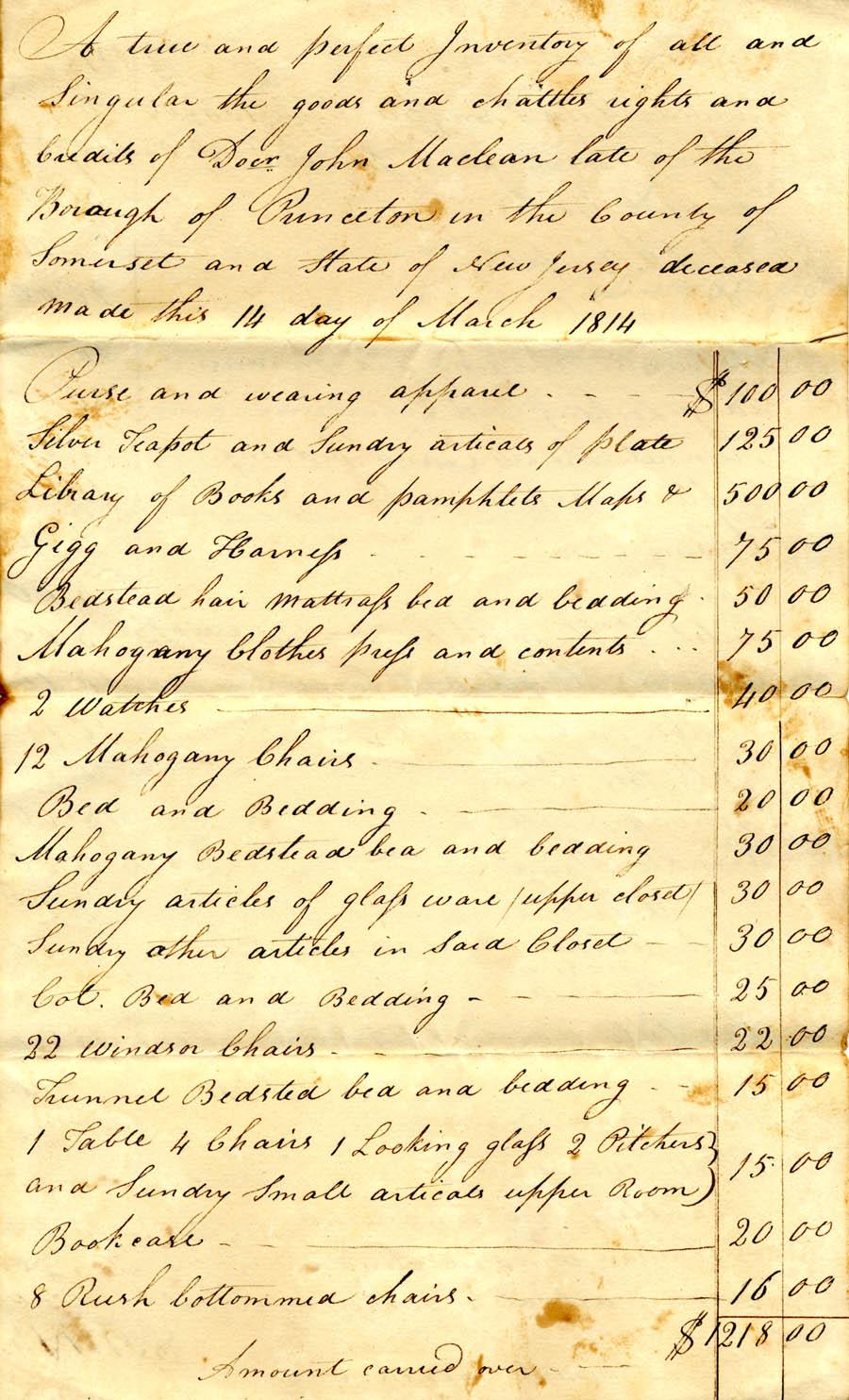 A significant collection of John Maclean, Jr. Papers has been acquired by the University Archives, thanks to the generosity of 11 Princetoniana Committee members. Maclean, President of the College of New Jersey from 1854-1868, saw the College through trying times such as the Nassau Hall fire of 1855 and the Civil War years. At the heart of the new collection are scores of letters written to Maclean during his tenure as President. The content of the letters ranges from official business of the President to personal matters of individual students. The collection also includes materials pertaining to Maclean’s parents and extended family, such as an 1814 inventory of the possessions of Maclean’s late father, the College’s first chemistry professor [See image of John Maclean Sr.’s inventory of possessions, top].

The papers complement Maclean material already held in the University Archives in the Office of President Records. “These papers represent a significant addition to our holdings on John Maclean, both in quantity and quality,” said University Archivist Dan Linke. “Maclean was an important figure in Princeton’s history, serving on its faculty and as an administrator for over 50 years. I am pleased that members of the Princetoniana Committee recognize this acquisition’s significance and that they continue their generosity in support of the Archives.”