In this week’s installment of our ongoing series bringing you the history of Princeton University and its faculty, students, and alumni, Samuel Clemens (Mark Twain) delights the campus with a surprise appearance, protests greet a segregationist governor’s visit, and more.

May 8, 1989—A freshman diagnosed with the measles is admitted to the McCosh Health Center, prompting approximately 500 students to get a booster vaccine to prevent an outbreak on campus.

May 9, 1901—Samuel Clemens (Mark Twain) surprises students with an unadvertised appearance in Alexander Hall, where he gives a reading of his work and entertains the crowd with stories about his adventures in Nevada and his attempts to learn German.

This letter from Samuel Clemens (Mark Twain), most likely to Stephen Van Rennseler Throwbridge, Class of 1902, dates from ca. 1901 and seems to accept an invitation to speak at Princeton “as long as one would only have to talk, & not have to talk long, nor make preparation.” Pyne-Henry Collection (AC125), Box 2, Folder 1.

END_OF_DOCUMENT_TOKEN_TO_BE_REPLACED 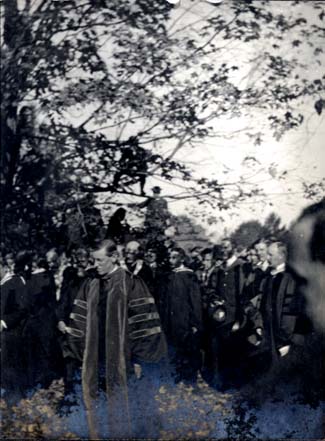 A wonderful end of the year gift came to the Princeton University Archives through the generosity of four alumni who serve on the Princetoniana Committee. The item, a photo album from a Class of 1904 graduate, was for sale on eBay. Donald Farren ’58 noted its availability and joined by Dave Cleaves ’78, Scott Clemons ’90, and Sev Onyshkevych ’83, saw that it made its way to the Archives.

The seller had advertised the Woodrow Wilson image (right) but had made no mention of the image of Samuel Clemens aka Mark Twain whose photograph was on the same page (below). The images were taken during Wilson’s inauguration as Princeton president in October 1902, and another image of Wilson taken that day is also found within the book. 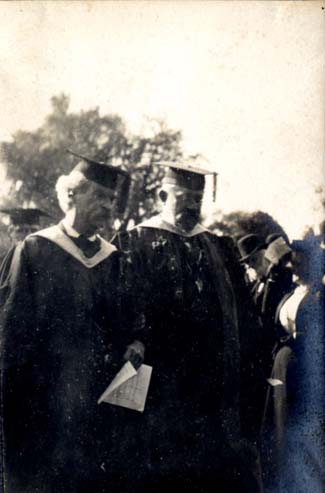 The volume, compiled by William Alsop Bours, also contains numerous candid shots of undergraduate student life, including Princeton buildings, snow scenes, students, dormitories, sporting and social events, as well as a set of pictures from a trip to Rome. The volume has been added to the Historical Photgraph Collection, Student Album series.