In this week’s installment of our recurring series, a dean dreams of pretty postcards, the natural history museum receives a significant donation of specimens, and more.

August 15, 1923—Andrew Fleming West, Dean of the Graduate School, writes to a friend about his hopes to get attractive postcards printed showing scenes around campus: “They have such cards at Oxford and Cambridge—really artistic souvenirs—some from photographs, some from pen-and-ink drawings. Why, O why can’t we do it?”

This postcard booklet contained 16 images from Princeton University and Princeton Theological Seminary’s campuses, with Nassau Hall on the cover (shown here) and the Graduate College on the reverse. It appears to date from the 1930s or 1940s. Historical Postcard Collection (AC045).

END_OF_DOCUMENT_TOKEN_TO_BE_REPLACED

In this week’s installment of our ongoing series bringing you the history of Princeton University and its faculty, students, and alumni, Arthur Conan Doyle gives a reading of Sherlock Holmes, Theodore Roosevelt lectures, and more.

November 10, 1975—As part of the U.S. Postal Service’s Bicentennial campaign to honor Revolutionary War patriots, a nine-cent postcard depicting former College of New Jersey president John Witherspoon is issued. On the reverse, the card notes that Witherspoon is the only college president to have signed the Declaration of Independence. A ceremony at Maclean House marks the occasion.

November 15, 1894—Arthur Conan Doyle reads extracts from Sherlock Holmes, The Refugees, and the currently unpublished “Le Chateau Noir” at Alexander Hall. He also speaks on his career and inspirations for detective stories. Reserved seats are 75 cents; admission is 50 cents.

November 16, 1917—Former U.S. President Theodore Roosevelt gives an address in Alexander Hall. He encourages Princeton students to wait for their chance to fight in World War I—it will come, he says, but now they should focus on school.

The Historical Postcard Collection consists of over 500 postcards documenting the buildings and environs of the Princeton University campus. Featuring both monochrome and color postcards, the bulk of the collection ranges in date from 1900 through the 1960s. Both unmarked and canceled postcards exist in the collection. 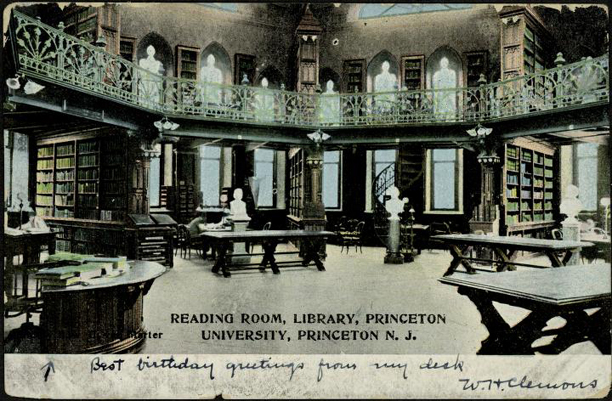