In this week’s installment of our recurring series bringing you the history of Princeton University and its faculty, students, and alumni, the Glee Club breaks speed records in the Midwest, the Princeton Alumni Weekly editor is drafted into military service, and more.

December 30, 1893—The Glee Club’s special tour train sets a record for the fastest journey ever taken from Louisville to Cincinnati, covering 119 miles in 136 minutes.

Though the Glee Clubs referred to themselves as part of “Princeton University” on the cover of their 1893-1894 Glee Club tour itinerary, Princeton didn’t officially change its name from the College of New Jersey until 1896. Historical Subject Files (AC109), Box 193, Folder 6.

END_OF_DOCUMENT_TOKEN_TO_BE_REPLACED

In this week’s installment of our recurring series bringing you the history of Princeton University and its faculty, students, and alumni, a campus documentary wins an Oscar, the Princeton Alumni Weekly appears for the first time, and more.

April 1, 1869—The Class of 1872 celebrates “All Fool’s Day” with a pasteboard band parade. In his senior year, participant Karl Case will later write of this experience, “Freshmen were funnier in those days than they are in these.”

April 3, 1974—A Search for Answers wins an Oscar for “Best Documentary Short.” The film examines education at Princeton University in an era of significant change.

END_OF_DOCUMENT_TOKEN_TO_BE_REPLACED

In this week’s installment of our ongoing series bringing you the history of Princeton University and its faculty, students, and alumni, a letter provokes debate over race, undergraduates complain of excessive demands on their time, and more.

October 30, 1942—A. M. Shumate ’29’s letter to the editor of the Princeton Alumni Weekly takes Daily Princetonian editor Frank Broderick to task for advocating that Princeton change its admissions policies and allow African Americans to attend. “To admit negroes would be to cut off the stream of excellent material that has traditionally come to Princeton from the South. That loss in enrollment would presumably be made up with dusky gentry. A smart deal? If Broderick is really keen on mixing ’em up he might well be acceptable as a transfer student at one of the better-known negro colleges.” Shumate’s letter will result in weeks of alumni debate in the PAW.

October 31, 1932—Students gather with local Princeton residents in a group of 1,500 at Princeton Junction Station to cheer and express support for Herbert Hoover’s reelection campaign as Hoover passes through on his way to Newark.

November 1, 1872—Students are asking for relief from demands on their time that include Saturday recitations and lengthy chapel exercises on Sundays as well as their Monday-Friday classes and morning vespers, but the Board of Trustees is reluctant to grant even a half-day per week off from College responsibilities. They are expressing concern that students will abuse free time if it is granted to them, “by going to Trenton and other places, as well as running up and down the streets at night, breaking lamps and causing disturbance…”

“Old Chapel” at the College of New Jersey (Princeton), ca. 1860s. Princeton students were required to attend daily vespers in chapel each morning until 1882, as well as both morning and afternoon services on Sundays until 1902. Compulsory chapel attendance ended altogether in 1964. Historical Photograph Collection, Grounds and Buildings Series (AC111), Box MP28, Image No. 651.

END_OF_DOCUMENT_TOKEN_TO_BE_REPLACED

With the policy that young lovers of the same sex may no longer sign the marriage register and that Michael Beer and Jason Rudy will have a retractory asterisk placed by their entry, neither side of the aisle gets what it wants. … No one who has attended ours, the most pragmatic of all universities, should be surprised. –Micah Weinberg ’98, “Stuck in the Middle of the Road,”  Progressive Review, November 1997

Eighteen years ago today, the first same-sex wedding was held in the Princeton University Chapel. Gay marriage was not legal in New Jersey (nor anywhere in the nation) so the ceremony was a symbolic one rather than a legally binding contract. The couple were both Princetonians. Michael Beer earned his Princeton degree in 1995 and had been a graduate student in plasma physics when he met Jason Rudy ’97, an English major. They had begun dating three years prior to the event and had been living together for two. Knowing that the marriage would not be legally recognized, Rudy told the Princeton Alumni Weekly, “With the exception of a stronger sense of commitment and emotional security, opening a joint bank account, and getting a new set of towels, nothing much will change.”

When news of their plans to marry in the Chapel appeared, it invited heavy criticism for the Assistant Dean of Religious Life, Sue Anne Steffey Morrow, who performed the ceremony. Though primarily concerned with the precedent set by having a same-sex wedding in the Chapel, another issue that troubled some students and alumni was that Beer and Rudy were atheists, while the wedding was heavily laden with the trappings of Christian tradition. Other responses were supportive of Morrow and of the couple.
END_OF_DOCUMENT_TOKEN_TO_BE_REPLACED

The most characteristic sound around the Princeton campus last week was not the familiar and rhythmic tolling of Nassau Hall’s bell, nor even the sleep-shattering bedlam of the steam-shovels on the new U-Store site. The sound around campus was everywhere: if you went to the heights of Blair Tower, behold, it was there, and even C Floor of the Libe, normally a haven for silence seekers, echoed and re-echoed the irritating noise. Everywhere you went, people were coughing. … The cough was almost always a good, lusty, chesty type which sort of set one apart as the bearer of a badge of courage and defiance—no infirmary was going to get his hands on him. No sir!

This week’s FluFest is one of the ways the University works to keep students in good health for their studies, but keeping Princetonians healthy has sometimes proven to be a significant challenge. The Bric-a-Brac for 1958 reported on hundreds of students “plagued by a rash of…sickness” (118) “bedded down at home or in the campus infirmary,” including in the Student Center, which “was converted into an emergency annex.” It doesn’t sound like students had as much fun that year, with many social events canceled by Dean of the College Jeremiah S. Finch. One morose senior complained,  “I mean it, it’s tragic—this [epidemic] … is ruining my senior year! Now I’ve got nothing at all to do but work on my thesis.” (Princeton Alumni Weekly, October 25, 1957)

Data taken from Report of the Committee on Health and Athletics for October 17, 1958 (found in the Board of Trustees Records).

There were typically about 100 infirmary admissions per month, but this jumped to over 600 in October 1957. The primary reason was a new kind of influenza sweeping across the globe. Nobody is certain where the new strain of “Asiatic Flu” (H2N2) originated, but the first reports of people falling ill from it came in Hong Kong in April 1957, with huge numbers of people succumbing to it wherever it was found. Concerned about the implications for the United States, government officials requested samples of the virus, and the Centers for Disease Control urged America’s six manufacturers of vaccines to get to work on a vaccine for it as soon as possible. By September, the vaccine was ready, but there was not enough supply to meet demand. Once school started, the virus began spreading dramatically. About 3-6 weeks after school began (the incubation period of the illness), absenteeism reached its highest levels. The Prince noted that at one point, 71% of Philadelphia’s students, including those at the University of Pennsylvania, were out with the flu. Indeed, this particular flu seemed to infect the young more than the old. A 1959 study later estimated that approximately 60% of America’s students had, at some point, been absent due to the flu in 1957.

END_OF_DOCUMENT_TOKEN_TO_BE_REPLACED

Every few weeks the Princeton Alumni Weekly focuses one segment of the magazine to highlight items from the Princeton University Archives entitled "From the Vault."

The articles are researched and written by alumnus W. Barksdale Maynard ’88 who has been contributing the content to the PAW for two years. Mr. Maynard has also written a few books, two focusing on Princeton, which you can see here. The concept of the articles originated with Editor Marilyn H. Marks *86 who has an interest in the University Archives, which are housed at the Seeley G. Mudd Manuscript Library. http://www.princeton.edu/mudd/

The most recent article focuses on a former Princeton alumni who was aboard the Titanic when it sank. http://paw.princeton.edu/issues/2012/04/04/pages/7288/

Recently PAW photographer Riccardo Barros and Art Director Marianne Gaffney Nelson came to Mudd to photograph physical items included in the collections for upcoming issues of the PAW. Here you can see a behind the scene’s view of how those articles come to life. 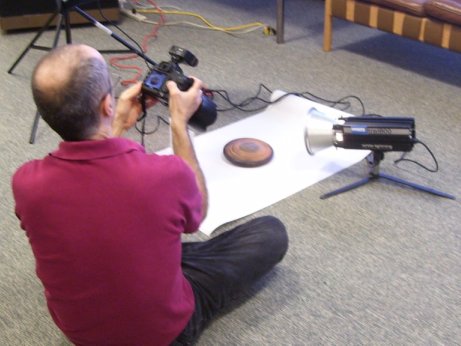 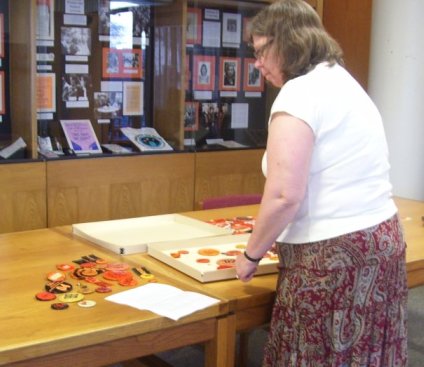 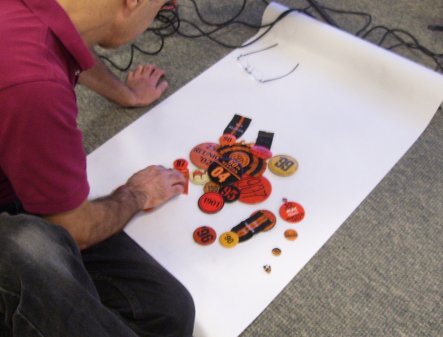 Keep checking the next few issues of the PAW to see these items explained!!
For more about the University Archives click here.