A year ago, after the introductory slideshow at the She Roars Conference for female Princeton graduates and students, various audience members asked President Shirley Tilghman if there was a museum or other exhibit documenting the history of women at Princeton. I remember President Tilghman directing the conference participants to Mudd Library if they were interested in learning more about the history of coeducation at Princeton. Mudd has featured an exhibit this year called “She Flourishes: Chapters in the History of Princeton Women,” However, Wikipedia articles about Princeton women created using University archives resources would enhance the online accessibility of this information, while ensuring its reliability. 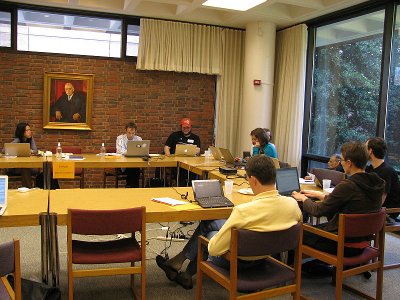 Enter the idea of hosting another Wikipedia Edit-a-thon at Mudd, this time on the theme of Women at Princeton. Wikimedia Community Fellow Sarah Stierch’s recent interview on CBC Radio 2, in which she discussed the Wikipedia gender gap and the fates of articles about women in academia, inspired me to organize this even to highlight the contributions women have made to Princeton as an institution and to help close the Wikipedia gender gap. 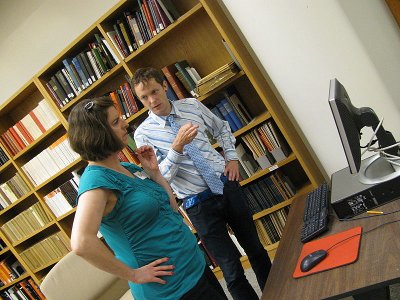 With help from members of the Wikimedia of NYC chapter, new Wikipedia editors teamed up with experienced Wikipedians in order to research and create articles for the history of women at Princeton, Coeducation at Princeton, and a few notable faculty and staff members. By the end of the day, we had drafts of articles in a few different users’ sandboxes on Wikipedia and an article on coeducation that is ready for expansion. 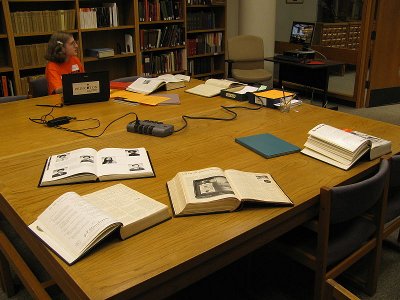 Sophomore Anna Kornfeld Simpson wins a gold star for using the most books in the reference room while researching women engineers at Princeton!

By the numbers, we had:
*Total participants: 15
*Princeton students: 4
*Usernames created: 5

We invite you to keep the momentum going by checking the meetup page, choosing a topic, and contributing your time and article-writing talent.

Mudd Manuscript Library’s new exhibition features women at Princeton, from the days of Evelyn College (1887-1897), mainly attended by daughters of Princeton University and Princeton Theological Seminary professors, to the appointment of Shirley Tilghman as the first woman president of Princeton University in 2001. For the first time our exhibit is accompanied by historical film footage from the archives. This compilation of segments from films and videos, most of which was featured previously in The Reel Mudd, is shown here.

The footage covers forty years of history of Princeton women, from the admission of Sabra Meservey as the first woman at the Graduate School in 1961 to Shirley Tilghman’s presidency. Subjects covered include the introduction of coeduation, student activism and Sally Frank, and activities of the Women’s Center and SHARE (Sexual Harassment/Assault Advising, Resources, and Education).

The compilation opens with footage of the Class of 1939’s junior prom in 1938 (taken from its Class film), which was attended by 606 women (all listed by name in the Daily Prince). Women only entered academic life at Princeton in 1961, when Sabra Meservey was admitted at to the Graduate School. The footage at 0:37 shows Meservey’s humorous account of her initial conversation with President Robert Goheen, who ultimately oversaw the introduction of undergraduate coeducation in 1969, and wanted to use Meservey as a “test case” at the Graduate School. (For the full story, see the the blog about the Celebration of Coeducation at the Graduate School.)

The only filmed recollections about the early years of coeducation were found on the documentary Looking Back: Reflections of Black Princeton Alumni (1:32), created on the occasion of Princeton’s 250th anniversary in 1996. The changes on campus did not please everybody. In 1974 Princeton icon Frederick Fox ’39 reached out to disgruntled alumni in the film A Walk in the Springtime, pointing out, perhaps tongue in cheek, that Nassau Hall’s two bronze tigers were male and female (3:19). In the following fragment, taken from the short Academy award winning film Princeton, A Search For Answers (1973), women feature prominently (3:55).

The last fragments feature woman activism and the gains of the women’s movement of the 1970s and the 1980s. Two fragments were taken from the Class of 1986’s Video Yearbook: a speech from Sally Frank ’80, who sued the last three all-male eating clubs (4:18), and a Women’s Center sit-in in May 1, 1986 (4:45). The last two fragments have not been featured yet in The Reel Mudd but will be shortly. The first is a sketch from “Sex on a Saturday Night,” a theater performance for freshmen about sexual harassment, presented by SHARE (5:11), The film ends with the inauguration of Shirley Tilghman (5:11) in 2001, taken from the documentary “Robert F. Goheen ’40, *48; Reflections of a President” (2006).

The exhibit “She Flourishes:” Chapters in the History of Princeton Women may be visited during Mudd Library’s opening hours on weekdays between 9.00 am and 4.45 pm. from now until the end of August 2012.