Recently, we’ve been getting a lot of questions about the history of racism at Princeton University. As we’ve worked to help those trying to research this topic, we realized that we’ve highlighted some types of racism more than others on this blog. In order to help researchers locate materials that may assist them in constructing a fuller picture of the history of white supremacy at Princeton, today’s post considers some examples of racism against Asians through the lens of yellowface in Triangle Club performances in the first half of 20th century.

Yellowface is a form of minstrelsy that mocks East Asians. It rose in popularity in the United States in the late 19th and early 20th centuries and was closely linked to anti-Black prejudice. As Krystyn R. Moon has explained, both blackface minstrelsy and yellowface are uniquely American phenomena, and yellowface drew on the tropes of blackface (including physical caricature, hybridized musical styles, and deliberate mockery of accents and dialects) to convey messages about nonwhite inferiority. Blackface primed audiences to understand the underlying meaning of yellowface. Yellowface became one of many ways Americans expressed strong anti-Asian (especially anti-Chinese) sentiment in this period and emphasized the idea that Asians could never become Americans.

As was the case nationwide, blackface minstrelsy seems to have predated yellowface at Princeton. This image is taken from the 1889 Bric-a-Brac.

Alongside the examples of redface and blackface in the University Archives, we also find incidents of yellowface in Princeton’s past. White students frequently played roles of non-white characters in the Triangle Club prior to World War II. Though the most common non-white characters they played were Native Americans, there were also a handful of East Asian characters in Triangle productions. These show evidence of the minstrelsy inherent in yellowface. END_OF_DOCUMENT_TOKEN_TO_BE_REPLACED

In this week’s installment of our recurring series bringing you the history of Princeton University and its faculty, students, and alumni, hazing makes national headlines, McCarter Theater opens, and more.

February 18, 1878—During a particularly severe outbreak of hazing, a gunfight breaks out on Nassau Street between freshmen and sophomores, with one student being shot in the thigh. Coverage in the national Police Gazette will follow.

Full-page ad from the Daily Princetonian.

END_OF_DOCUMENT_TOKEN_TO_BE_REPLACED 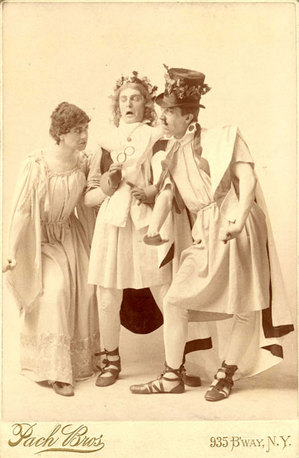 From Triangle and Intime to the Princeton Mime Company, Quipfire!, and many more, all collections in the Princeton University Archives related to campus theater groups and venues are now described online and available for research in the Mudd Manuscript Library.

A guide outlining 28 different collections about theater at Princeton is also now available online. While intended to be thorough, the libguide is not exhaustive, and additions are welcome.