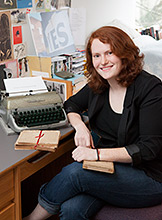 Princeton University senior Flora Thomson-DeVeaux has met Santiago Badariotti Merlo again and again, in her courses and in her travels, though their paths have never crossed in real time.

Now Thomson-DeVeaux, the 2013 winner of the Martin Dale Fellowship, will spend the next year tracing the butler and writer’s footsteps across the Americas. She will delve deeper into his life and writing, which intersect with several themes over the course of the 20th century — the rise and decline of two of Latin America’s biggest cities, economic and class history, and attitudes about homosexuality. She plans to turn her senior thesis on Badariotti Merlo, who was born in 1912 and died in 1994, into a full-length book.