Posted on March 22, 2013 by Rare Books and Special Collections 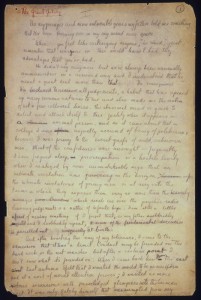 F. Scott Fitzgerald, Class of 1917. Great Gatsby autograph manuscript, page one. Not to be repro­duced with­out per­mis­sion of the Prince­ton Uni­ver­sity Library.

Australian director Baz Luhrmann’s latest film, The Great Gatsby, will open the 66th Festival de Cannes in the Grand Théâtre Lumière of the Palais des Festivals on May 15, 2013. 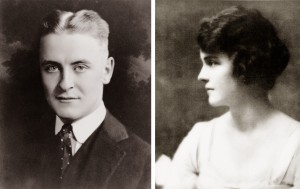 During the summer of 2011, Luhrmann and several members of his production team made a research visit to the Department of Rare Books and Special Collections to view Fitzgerald’s heav­ily cor­rected autograph manuscript and gal­leys of The Great Gatsby, as well as related material in the F. Scott Fitzger­ald Papers and other collections in the Manuscripts Division.   The British actress Carey Mul­li­gan, who plays Daisy Buchanan in the movie, also vis­ited to view por­tions of the Fitzger­ald Papers and in par­tic­u­lar to meet with Don C. Skemer, Curator of Manuscripts, to discuss Fitzgerald’s rela­tion­ship with Ginevra King, who served as a model for Daisy, Jay Gatsby’s lost love.

For more about the visit, including comments from Luhrmann and Mulligan, see “A Gatsby Visit.”