Original Art for The Great Gatsby Dust Jacket on Display

Posted on May 17, 2013 by Rare Books and Special Collections 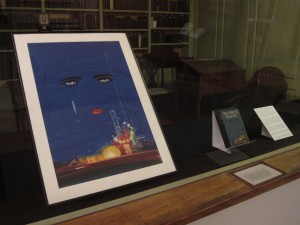 Beginning Friday, May 17, and continuing through Saturday, June 1, 2013, the public is invited to the Firestone Library to view the original art for the dust jacket of F. Scott Fitzgerald’s first edition of The Great Gatsby. The gouache painting by Francis Cugat (1896-1981) along with a copy of the final published novel in its original dust jacket will be on view in the Rare Books and Special Collections 18th century gallery just off Firestone’s main lobby. 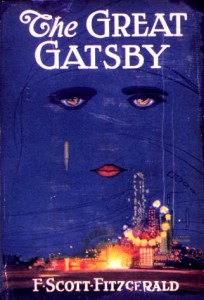 Thanks to the generous donation of Charles Scribner III, Class of 1973, the Princeton University Library owns this original dust jacket art. Writing for the Princeton University Library Chronicle in 1992, Scribner explained how he came by the drawings. His cousin, George Schieffelin, discovered the Cugat gouache sketch in a trash can of publishing “dead matter” and took it home. Passed down through the family, the art eventually came into the hands of Charles Scribner III, who kindly donated it along with hundreds of other books, papers, and works of art to Princeton.

According to Scribner’s research, Francis Cugat was born in Spain and raised in Cuba along with his brother, the musician and orchestra leader Xavier Cugat. Francis worked in New York City as an illustrator in the 1920s and 1930s, before moving to Hollywood. The Great Gatsby commission came in 1924, while the book was still unfinished. Originally titled “Among the Ash Heaps and Millionaires,” Fitzgerald also toyed with calling it “Trimalchio in West Egg,” “On the Road to West Egg,” and “Gold-hatted Gatsby.”

Fitzgerald liked the design Cugat proposed (for which the artist was paid $100) and wrote to his publisher, “For Christ’s sake don’t give anyone that jacket you’re saving for me. I’ve written it into the book.” Cugat called his design “Celestial Eyes.” The novel was first published with this jacket in 1925 and again in 1979 for the Scribner Library paperback edition.

This entry was posted in Exhibition. Bookmark the permalink.