Posted on May 5, 2015 by Rare Books and Special Collections 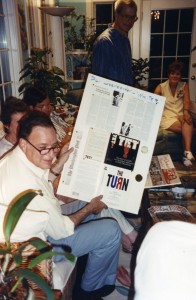 Don Oberdorfer ’52, author of Tet! and The Turn: From the Cold War to a New Era. Part of the Don Oberdorfer Papers (MC162) and described here.

Robert Fagles (1933-2008) was an American professor, poet, and academic, best known for his contemporary translations of ancient Greek and Latin classics, especially his acclaimed translations of the epic poems of Homer. The papers consist of professional and publishing correspondence, along with manuscript and typescript drafts, corrected proofs and galleys, notes, revisions, and other files regarding his English translations of ancient Greek and Latin texts, including Homer’s Iliad and Odyssey, Virgil’s Aeneid, Aeschylus’s Oresteia, Sophocles’s Three Theban Plays, as well as poems by Bacchylides and Pindar.

The collection contains edited typescripts and copies of Cuban writer Severo Sarduy’s poems, essays, and translations, along with writings about Sarduy, interviews, notes, clippings, and other printed materials. Correspondence includes a group of postcards sent to Severo Sarduy and his partner François Wahl in the 1960s and 1970s from various European and Latin American writers and philosophers, including Roland Barthes, Alain Badiou, Reinaldo Arenas, Octavio Paz, and Jacques Lacan, and additional correspondence of French editor and structuralist François Wahl.

Consists primarily of the professional papers of prominent late 19th- and early 20th-century American theatrical stage manager and director William Seymour (1855-1933). The majority of papers include correspondence as well as numerous production-related materials, such as playscripts, promptbooks, and sheet music. Family members, particularly other well-known theater figures, such as Seymour’s sister-in-law Fanny Davenport (1850-1898), are also represented in the collection through correspondence, production materials, ephemera, and newspaper clippings.

Series 3: 2015 Accession, 1930-2008 (mostly 1978-2008) is primarily composed of Oberdorfer’s notebooks that document his service as diplomatic correspondent at the Washington Post and his work post-retirement. The notebooks from Oberdorfer’s journalism career are especially significant for their detailed notes and commentary on his travels abroad, including his many trips with Secretary of State George P. Shultz to Asia, the Middle East, and the Soviet Union. Oberdorfer’s additional travels to Korea, Japan, and China after his retirement and his attendance at a variety of domestic and international conferences are also chronicled in his notebooks. To a lesser extent, the collection contains typescript drafts of Oberdorfer’s unpublished autobiography “Beyond the First Taxi Zone: Adventures of a Cold War Correspondent.” Oberdorfer’s general files of research materials and writings, often compiled in the course of conducting research for his autobiography, mostly pertain to the political climates of Japan and Korea, U.S. foreign relations under the Ronald Reagan administration, or to Oberdorfer’s biography of Senator Mike Mansfield.