Posted on June 5, 2015 by Rare Books and Special Collections 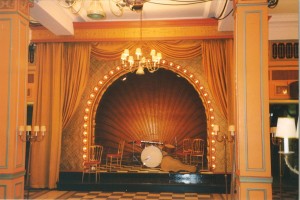 Abigail Klionsky is a member of the Princeton University undergraduate Class of 2014 who undertook an oral history project on Jewish student life at Princeton as part of her senior thesis. The collection consists of fifteen transcripts of Klionsky’s interviews with Jewish alumni and also includes a copy of a transcript of Henry Morgenthau III’s interview with David Frisch in 1979.

Consists of correspondence, dating from 2000 to 2011, between the art historian Charles W. Millard and British sculptor Sir Anthony Caro (1924-2013). Also included are a few letters, dating from 1984 to 2000, between Anthony Caro and the Very Reverend Peter R. Baelz (1923-2000), who had collaborated with Caro on The Last Judgement: Sculpture (Museum Würth-Verlag Paul Swiridoff, Künzelsau, 1999).

The David L. Aaron Papers primarily document Aaron’s service as Deputy National Security Advisor under Jimmy Carter’s administration, although records pertaining to his work for Walter F. Mondale and his activities in the private sector are also present. Aaron’s chronological files, speeches, subject files, and writings from his White House years provide insight into the national security issues that dominated his term, especially U.S. relations with the Soviet Union. Of particular note are briefing papers, speech drafts and talking points, correspondence, and other materials created in the course of Jimmy Carter’s 1980 re-election campaign. Materials that are more administrative in nature are also present in the form of invitations Aaron received, his schedules and appointments, and his telephone memorandums. To a lesser extent, the collection includes records related to Aaron’s work for Walter F. Mondale, both in his position as Mondale’s legislative assistant in the U.S. Senate and as a foreign policy advisor for Mondale’s 1984 presidential campaign. There is also a small amount of documentation on Aaron’s tenure with Oppenheimer and Company and a number of his speeches and writings that postdate his tenure in the Executive Office, including a typescript of his first novel.

Consists of the personal correspondence of Josiah S. Studdiford (1837-1862), documenting his service with the 4th New Jersey Infantry during the U.S. Civil War, including battles in which he was involved; his capture and time as a prisoner of war at Libby Prison (Va.) in the summer of 1862; and his death during the Battle of South Mountain (Md.) on September 14, 1862. Also included is the largely personal correspondence of several of Studdiford’s relatives, including his grandfather, John Neely Simpson (1770-1832); his brother, Peter Augustus Studdiford (1828-1886); and his uncles, James Hervey Simpson (1813-1883) and Josiah Simpson (1815-1874). Many of those represented were Princeton University graduates.

Autograph manuscript of Louis Marie, comte de Sainte-Maure (1700-1763) that appears to the author’s attempt at a major revision or enlarged version of a book, which he had published anonymously in 1753 under the title: Delassement du coeur et de L’esprit. Par un solitaire ([Paris], 1753). The date 1753 in the manuscript is presumably that of the printed version, which did not include the author’s concealed identity on the title page (“M. le C.D.S.M.”). Contains frequent textual additions and deletions, many of which are either written between the lines or in the outer margins. 2 volumes bound in 1, armorial binding in calf, gift, with the gold-stamped arms of the comte de Sainte-Maure on the upper and lower covers, as well as the spin.

Princeton and Slavery, HIST 402, is a course that explores the historical connections between Princeton University and slavery, as well as the relationship between the town and the college as pertains to race relations and slavery, and the town’s African American population. The collection consists of materials created and compiled by students and instructors in the Spring and Fall of 2013 including copies of original documents collected by the students from the New Jersey State Archives, microfilmed sources within Firestone Library, and final papers of the students; the collection also includes correspondence about the course with alumni.

The Princeton University Community House is a student-led organization that was established in 1969 by seven undergraduate students to provide academic and social enrichment programming to black youth and adults living in low-income Princeton neighborhoods. The Princeton University Community House Records document the origins and activities of the organization since its inception and through its first three decades.

Department of Spanish and Portuguese Languages and Cultures Records (AC399)

Series 13: 2015 Accession, 1952-2015 (mostly 2002-2014), consists of author files and correspondence, editorial materials, administrative and financial files, circulation and publicity materials, and project files of The Hudson Review, documenting the magazine’s activities from 2006 through 2014, although some materials predate this period. Author files and issue files largely span these years, while financial files largely span from 2002 to 2008. Author, issue, financial, administrative, and publicity files are largely chronological continuations of earlier series. However, files related to special projects and publications of the The Hudson Review are also present in this series, regarding its Writers in the Schools program and its anthologies, Writes of Passage (2008) and Poets Translate Poets (2013). A collection of materials related to founding editor Frederick Morgan (1922-2004) is also present and includes condolence letters, obituaries, and tributes following his death in 2004, printed materials, and signs from his office.

Office of the Dean of the College (AC149)

Subseries 23A, Valerie Smith Emails, documents Smith’s correspondence with executive Dean of the College administrators, University Cabinet officials, and committees, such as the Council of Masters and the Faculty Committees on the Course of Study and Examinations and Standing. A considerable volume of correspondence exists between Dean Smith and Carla Hailey Penn (Executive Assistant and Office Manager), Nancy Kanach (Senior Associate Dean of the College), and Clayton Marsh (Deputy Dean of the College). ODOC offices particularly well documented include the Office of International Programs, the Office of Undergraduate Research, and the McGraw Center for Teaching and Learning. Topics covered range from academic affairs and academic planning to diversity and curriculum development.

Series 1: Public Policy Seminars, 1930-2014 contains the final papers, and sometimes additional course materials, from the eponymous junior and senior level courses that have been a capstone of the undergraduate experience in the Woodrow Wilson School of Public Policy since its founding. The “Creator” names listed below indicate the Professor who taught the seminar.