Posted on January 7, 2016 by Rare Books and Special Collections 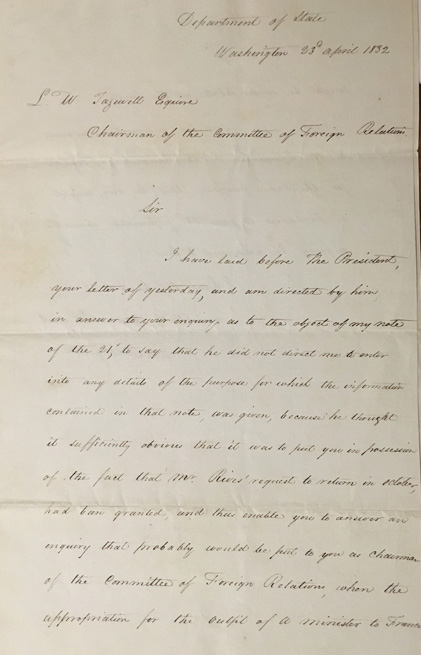 Likely one of the first French monographs about physiognomy, this manuscript was probably written in the years following the publication of the work “De la Sagesse” by Charon (1601), which is the latest book quoted by the author. The very dense text gives a detailed presentation of an elaborated theory of physiognomony, with more than 200 chapters and distinct sections. The anonymous author, who appears to have been astrologist, chiromancer, architect, and mathematician, first gives a general description of the body and the soul, after Hippocrates’ humoral theory, as well as the connections which bind them together, and the factors that influence the temperament. The author then follows with a very detailed enumeration, in various chapters of significations, of the physical particularities of each part of the body.

An anonymous, partially unpublished text about the life of Guillaume-Thomas-François Raynal, abbé de Raynal (1713-1796).  Most of the text is Raynal’s Address to King Louis XVI, published in Marseilles in 1789; however, there are also 33 unpublished pages devoted to finances.  Antoine Jay’s biography of Raynal, Précis historique sur la vie et les ouvrages de l’abbé Raynal, published in 1820, is very similar to this manuscript, though his work is missing several pages that this item contains, including the last leaf and one or two pages from the end the introduction.

Consists of miscellaneous professional and personal papers created by various members of the Delafield, Livingston, and other related families, including Edward Livingston (1764-1836), Philip Livingston (1740-1810), and Philip Schuyler (1788-1865), among others. Materials about family members are also included.

William Chapin Seitz (1914-1974) was an art historian, painter, and museum curator who received the first PhD in modern art from Princeton University in 1955. The collection consists of ten notebooks Seitz kept for his early courses on ancient art and architecture in Princeton University’s Department of Art and Archaeology in 1949 and 1950. Notebooks contain reading and lecture notes, sketches of ancient sculptures and buildings, and clippings from art history textbooks, including reflections on lectures by Princeton professors E. Baldwin Smith and Richard Stillwell.

The Program in Hellenic Studies Records document the academic and cultural offerings sponsored by the Program. The offerings include lectures, discussions, and colloquia led by faculty, fellows and visiting scholars, as well as concerts, exhibitions, and film screenings. The records also include annual reports of activities, lists of fellows, and related materials. The records primarily consist of email correspondence, reports, and promotional materials such as flyers and programs.

A 2015 addition to the collection includes print out draft manuscripts with heavy handwritten edits and annotations of Pitol’s works dating from 2001-2010, which include drafts to El mago de Viena, La vida conjugal, and El Viaje.