Posted on May 5, 2016 by Rare Books and Special Collections 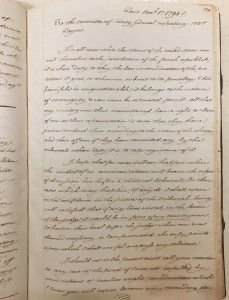 This diary, written by British politician Sir Stuart Montagu Samuel (1856-1926), documents a visit that he and his brother, Herbert Samuel, made to the United States and Canada in 1888.

John Longworth Swift (1922-2013) was senior engineer and vice president of the Development and Resources Corporation (D and R). The majority of the collection pertains to Swift’s work for D and R, especially his supervision of the Dez Dam project in the Khuzestan region of Iran, though other domestic projects and projects involving the nations of Vietnam, Nicaragua, Afghanistan, Uruguay and others are also documented. In addition, the collection contains D and R’s administrative records from the late 1960s and early 1970s, particularly internal correspondence and notes regarding the general policies and restructuring of D and R.

T. A. Barron (1952- ) is an American writer of fantasy literature, books for children and young adults, and nature books. The collection consists of his literary and personal papers, including manuscripts and other draft materials, copies of his books and related promotional materials, international editorial correspondence, articles and speeches, personal journals and letters, fan mail, and correspondence with other authors.

A notebook used by Domenico di Francesco Cecchini (flourished 1660s), who was perhaps a professional secretary, primarily for his unpublished epistolary manual, “De conscribendis epistolis.” Most of the text is a formulary of letters in Italian and Latin, written by Cecchini himself in a cursive hand.

Dating from September 1794 to December 1795, this secretarial copy letter book contains 112 letters written by Monroe while he was serving as Minister to France to both American and European leaders. Although Monroe published a significant number of these letters in his “A view of the conduct of the executive, in the foreign affairs of the United States, connected with the mission to the French Republic, during the years 1794, 5, & 6” (1797), the letterbook includes eighteen previously unknown or unpublished letters and twelve with previously unrecorded corrections in Monroe’s hand.

Joseph Frank (1918-2013) was an American literary scholar best known for his five-volume biography of Russian novelist Fyodor Dostoyevsky, which he began in the early 1970s and completed in 2002. Recent additions to the Joseph Frank Correspondence include more correspondence with authors, friends, and family dating from the 1960s until 2013, including several additional letters from Yves Bonnefoy and Pierre Bourdieu, condolence letters sent to Marguerite Straus Frank following his death, printed materials inscribed to him, clippings, an interview transcript, and a small amount of miscellaneous writings by Frank, including notes from his PhD coursework at the University of Chicago, and some copies and corrected drafts of reviews and articles.