It is always difficult to watch silent films of early Triangle shows, which are as famous for their music and witty lyrics as for the all male kicklines (read our previous blog for an introduction). Even without sound, however, the films of All In Favor are still a visual treat. Footage of the performance, a dazzling display of virtuosity and color, is alternated with dressing rooms scenes, displaying the fun of stockings, wigs, and long flowing skirts.

All in Favor, is, in Triangle’s own words, a “fast-moving musical comedy satire on American politics, its methods and madness,” set in a little town in Indiana in the 1920s, where a mayor is running for reelection with the help of  his “non-too-honest” campaign manager. His opponent is the reform candidate widow Dawes, whose daughter dates a Princeton student  (a summary of the story, taken from the press release, can be found in the Daily Princetonian). The script was written by Triangle president Francis S. Hartley ’50 (pictured at 0:16), vice-president Thomas H. Middleton ’48, secretary Kennedy Williams ’48 and Edward H. Tuck ’49. 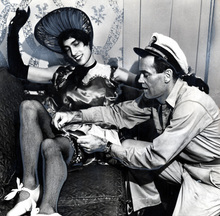 The first of the two films, which includes excerpts from Act I, opens with preparations prior to the show, including dressing room scenes and orchestra practice (0:18-2:10). Although some of the footage on the stage includes singing and acting, the two films merely capture the 16-man Triangle chorus, performing specialty dances and production numbers created by choreographer Morgan Lewis. In Act I this includes the Can-Can shown at 4:42. The photo at the right, which was found in the Triangle Club Records, shows film star Henry Fonda, adjusting the garter of chorus leader James C. Neely ’48. Although Fonda attended one of Triangle’s rehearsals, he is not included in the films featured here.

The film ends with the minstrel show at the mayor’s campaign rally (7:38), a particular novelty that received a lot of attention.

The second film, which captures Act II of the performance, opens with a member of the chorus (a “chorine”) pulling on stockings, which is followed by a prisoner escape (0:27) and chorines dancing the Charleston (1:24). A traditional ballet, preceded by another dress-up scene, is shown at 3:40. When the curtain falls, the casts sings the Princeton alma mater “Old Nassau” (7:17).

Existing photographs of the performance did not allow us to identify individual actors and chorus members. If anyone is able to add names to the faces on these films, please comment on this blog!

These 16mm films are part of the Triangle Club Records at the Princeton University Archives (box 177).  Mudd Library is thankful for the support that the Triangle Alumni Board provided for digitizing these films and unlocking their contents.