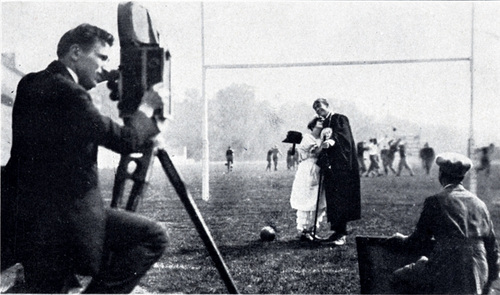 It started at Yale
On February 19, 1920 the Daily Princetonian announced Yale’s decision to record important campus events on film, to be kept by the classes and used for reunions. By the end of that year, according to the Prince, Princeton’s Class of 1921 had established a “fund by which a class motion picture could be taken, including scenes which might prove to be of interest to the Class in later years.” The film of its graduation weekend in June 1921, featured in our first post, must have been the result. Following the example, the Class of 1922 appointed a Motion Picture Committee at the beginning of its senior year to coordinate its own class and football films, thus starting a tradition  that lasted through the 1930s. Only a few class films have survived in the University Archives. What happened to the others? Do we know what was lost? A recently discovered box of records of the Graduate Council, part of the yet unprocessed Records of the Alumni Organizations provides some answers.

Renting a film from the Graduate Council
The box contains correspondence (1921-1950) about Princeton’s class and football films, which were the property of the classes. They were kept by the Graduate Council on their behalf, which rented the football films to alumni groups around the country. The records include detailed handwritten and typescript lists, drawn up in 1931, of seventy silent movies, usually one to three reels long. The summaries and lists of the film captions or “titles” that were used give a good idea of the contents of Princeton’s films of the 1920s (lists of the class films of the 1930s are lacking). A few films were listed as property of the Graduate Council itself: some unidentified (presumably early) football games, the short lived Arthur Penrose (1923), a comedy produced by film enthusiast Stas Azoy ’14, who seems to have been in charge of the films at the time, and the University’s very first promotion film Princeton (1921). This five-reel film (85 minutes), which was revised three times and renamed Just Princeton and Princeton: a ‘National University,‘ was rented to high schools and other interested groups until 1926, when it was considered outdated (most of the footage was apparently seven years old). The silent movie, which was initially meant to be accompanied by Princeton songs and music, has not survived, but the list of captions in the film provides a detailed account of the scenes (see Princeton film.pdf).

After the Class of 1922’s appointment of a Motion Picture Committee  to ensure a memento of its senior year, all classes followed suit. On November 3, 1922 the Prince announced the merger of the four class committees into one central body with representatives from all four classes. It would film campus events of interest to all, so that each class would have a complete four-year record, ending with its commencement. The first films taken under the new management were shown in the Garden Theater on December 7, 1922. They included the Class of 1926’s “Flour Picture” (a hazing ritual in which sophomores dumped flour and water on freshmen prior to their first class picture) and the football victory over Yale and championship celebration in November.

The annual flour picture would only be filmed a few more years, as the tradition was discontinued after 1925. But the major football games continued to be filmed in the fall. The football films, which were most popular among alumni groups, took up half of the collection of the Graduate Council. They were the property of the class in whose senior year they were taken. The football films for 1926, for instance, were the property of the Class of 1927 (left). The majority of the remaining class films were shot during spring and Commencement. The spring films usually featured committees and groups, campus scenes and sports. Sometimes the footage included small skits. In addition to these films, the Graduate Council’s lists include a few films of rowing, baseball, and other sports, as well as some early reunion films.

Who did the camerawork?

With the merger of the four motion picture committees into one body in 1922, the new Motion Picture Committee became a permanent 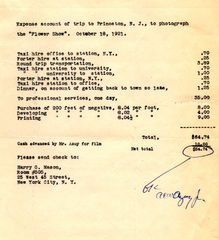 organization that was funded by the classes through annual contributions from students. In the beginning of 1923 the Committee purchased a camera, to be operated by Louis Cray of the University Music Shop. For major events, however, the Committee hired professional cameramen from New York, as had been done on previous occasions. Only little is known about the men who were hired over the years. The early Graduate Council records, however, include a bill from one Harry Mason, submitted  by Stas Azoy, for the filming of the flour picture in 1921 (right). According to an article in the Prince, the footage of the football victory over Yale on November 18, 1922, which was included in the popular football film “Champions: 1922” (above) was shot by the company of movie mogul Lewis Selznick, father of the producer Gone with the Wind, whose company would go bankrupt in 1923.

Another New York cameraman who filmed for the Motion Picture Committees was the photographer  Paul Strand, whose photographs were recently acquired by the Philiadelphia Museum of Art. Strand approached Secretary Varnum Lansing Collins in 1924 about shooting Princeton’s sport events, claiming, according to Collins in a letter to Azoy on April 25, to be the sole operator of the Akely camera, the “only camera that can take athletic pictures with any adequate success.” Collins was not impressed: “He reminded me very much of that queer bird with whom, we used to deal a few years ago, whose name I have forgotten.” Despite Collin’s reservations, Strand started filming the football matches for the Class of 1926 in 1925. By February 1929 he was, according to a letter from Collins successor Alexander Leitch, the man who did “all the motion picture work for Princeton classes” (2/4/1929). Strand’s name appears on the film lists of the Class of 1926, and of some Class of 1928 film lists. Surprisingly, two of the 1925 football films were found among the records of the Class of 1895 (part of the Princeton University Class Records).

in 1931 the new Motion Picture Committee decided not to hire cameramen from New York three or four times a year, but instead opted for a local photographer to film “interesting happenings from day to day.” Little is known about the class films for the next eight years, but the focus seems to have been on sports features. According to an article in the Prince, the Class of 1939, however, deviated from this trend, and provided a more personal, comprehensive review of the Class’ years on campus. The film survived in the University Archives and will be featured in a future post. 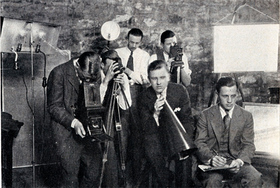 Two other campus films were shot in 1928 and 1931, both with the name “Princeton,” like Princeton’s first promotion film, but filmed by undergraduates. The first was shot by students who called themselves “Undergraduate Motion Pictures” (pictured right) who, according to an article in the Prince, financed the film themselves. They do not seem to have had any dealings with either the Graduate Council or the Motion Picture Committee however, unlike the 1931 film by Laurence B. Rentschler ’32, which was shot under the supervision of the Motion Picture Committee and made available to the Graduate Council. Sadly, neither film have survived in the University Archives.

So what happened to the films?

The correspondence of the Graduate Council allows us to follow the history of the films through the 1940s. Like the Dulles newsreel, featured in a previous post, they were recorded on 35mm cellulose nitrate based film, and hence were highly flammable and a risk for insurers. In 1931 the films were therefore moved to the “explosives room” in the basement of the newly built Frick Chemical Laboratory on Washington Road. But the moisture and the fumes from the chemicals that were also stored there badly damaged the containers of the films, making many of the labels unreadable. In 1942, the films, a total of some 170 cans, were moved to Bonded Film Storage, a professional storage facility in New York. According to correspondence in the Graduate Council’s records, the classes who owned the films were encouraged to transfer their movies to 16mm film, but it is unclear how many classes did so. Thankfully, enough films survived to give us a visual idea of life on campus in those years.