The film featured here, shot around 1928, contains three distinct sections. The first contains images of the Princeton Polo Team playing on W. B. Devereux Jr. ’04 Field (0:00-5:52). The second section opens with a woman and a small boy after the polo tournament (5:53-5:58), followed by scenes of Prospect Avenue and the various eating clubs located on this street (5:59-6:45). The third section documents the annual inspection of the Reserve Officers’ Training Corps (ROTC) Field Artillery Unit, performed by representatives of the United States War Department. The origins of the film, which does not appear on the list of films that were kept by the Graduate Council in 1931, are unclear.

Although polo has been around for millennia, the first documented games on Princeton’s campus occurred in 1902, when Walter Bourchier Devereux Jr. ’04 and a few classmates organized a group of polo matches. The popularity of the sport grew quickly among the students, and by the spring of 1903, Princeton was the first college to officially adopt polo as a collegiate sport. Harvard and Yale soon followed suit. As rapidly as the sport emerged on campus, it soon diminished, due to a number of factors including the cost to secure and maintain horses and lack of interest from later classes. 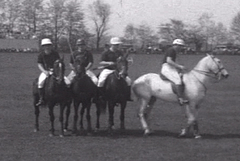 It was not until 1919, with the creation of the ROTC Field Artillery Battalion, that polo would once again be played at Princeton under the leadership of Major J. E. McMahon, 1st Commandant of the Princeton Unit. He introduced the sport to the unit in order for its members to develop fundamental combat skills. Most of the polo players were members of the ROTC unit and were provided auxiliary horses and equipment by the Unites States War Department; those players, however, who were not members of the unit had to provide their own horses.