So I was stuck trying to figure out something to write for this blog post when I stumbled upon this recent Gawker article:

Basically, some guy called Nolan Daniels posted this picture on his Facebook page. 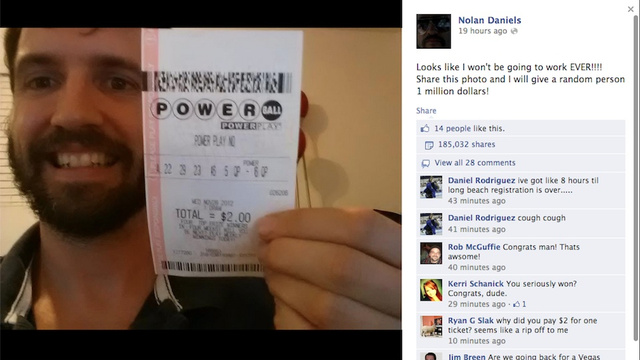 Yes, that is the winning Powerball ticket. You are looking at a man holding a $239 million dollar ticket. In his ecstasy, he even posted “Share this photo and I will give a random person 1 million dollars!” 185,032 shares and many comments saying “I shared it!” later, Gawker got a hold of the story.

All’s well and fine except for one small thing: that isn’t a real ticket. Unlike real Powerball tickets, the numbers weren’t in numerical order. Its a fake, a phony, a Photoshop. You didn’t even need to look at the pixels.

But what makes this interesting isn’t the fact that some bored dude made a fake lottery ticket and posted for the world to see, but how others respond to this picture. Although we generally see Facebook as private, every once in a while, we some some meme start flooding pretty much every profile. Right before this was the privacy notice. Before that were “Repost this status to help this twelve year old girl pay for cancer!”. And this phenomenon isn’t even localized to Facebook. On Youtube, you would have comments like:

“PLEASE DON’T READ THIS. You will get kissed on the nearest possible Friday by the love of your life. Tomorrow will be the best day of your life. However, if you don’t post this comment to at least 3 videos, you will die within 2 days. Copy and paste this, to be saved”

This existed even before in email where people would sent each other sob stories about burn victims and tell people to forward them to help raise money.

Why do people do this, though? Not a single dollar is going to be raised for cancer victims if you copy and paste the status nor is some man you’ve never seen before in your life going to hand you a million dollars (and pay a hefty gift tax for doing so).

This simple act of copy and pasting makes people feel like they’re doing something or part of something. For people, its essentially a quarter of a second investment to do something that might benefit the world or put themselves in a better position. If more time was required, say if the Youtube chain letters told you to write 500 word blog posts in order to avoid death and find your life partner, then people would no longer be so willing to follow the instructions. The investment is no longer worth the trade off.

This is how humans function and have functioned from the beginning of time. We’ve been hardwired to prefer short term benefits since long term benefits don’t mean anything if we don’t survive the short term.

And, long story short, this is why you see the obviously phony reposts flood your friends wall from time to time.