Surrealist film is best described by a paradox: illogical logic. The audience of a Surrealist film gets the impression that there is something more to the illogical story that they are being presented. These films are so bizarre that it is impossible to understand through logic, so we as an audience respond emotionally. We crave an explanation to this absurdity, and a desire to understand it is what takes the viewer out of the conscious mind and into the realm of the unconscious.

Surrealism as a movement was captivated by instances where the unconscious and the conscious were brought together as conflicting forces, and sought to tap into the creative potential that lay there. Surrealist artwork aimed to be subversive, to incite a “revolution of the everyday,” and to help others view the world through a Surrealist lens. Indeed, from automatic writing to objet-trouvé artworks, surrealist works were often about attempting to subjugate the conscious to the unconscious to achieve a higher state of understanding. Surrealists all shared a fascination with dreams, the domain of the unconscious, and luckily, the foundations of the Surrealist movement coincided with the rise of cinema as popular entertainment. Surrealism is very well suited to visual media, but it is especially suited to cinema.

Cinema combines and expands upon upon media such as theater, painting and photography, and allows for easily reproducible and distributable performances.[1] A surrealist film can readily reach and affect a wider audience than a physical painting or object, making it a very effective proponent of the surrealist message. For instance, Un chien andalou’s showing was extended to last 8 months in Paris due to its popularity, longer than most art exhibitions.[2] In addition, films are easier to disseminate without a danger of damaging the artwork – L’age d’or crossed the Atlantic to be shown in New York in a private screening in 1933, despite it being banned at the time.[3] Film is a completely immersive medium, in which the filmmaker can transport the viewer for a chosen period of time to an alternate reality. The act of watching a surrealist film is much like that of dreaming; neither the spectator nor the dreamer are able to control or rationalize the experience. Additionally, the technical process of making a film allows for the deconstruction and reconstruction of images into a “marvelous and uncanny dream world that redoubles reality”.[4]

Dada films are the precursors of the Surrealist cinematic tradition. Common traits to both are a lack of logic, bizarre image sequences, and desire to defamiliarize reality. There was a crossover between both movements, and Dadaist filmmakers such as Man Ray later moved on to make Surrealist films. However, the incoherences, abstractions, and lack of a narrative in Dadaist cinema create a distance between the viewer and the film that is counterproductive to the goal of surrealism. Dadaism was nihilistic, anarchist, destructive and aimed to provoke. While Surrealism was also certainly provocative, it intended not to destroy reality but rather to create an alternate one. Additionally, Dada films did not tend to address psychological themes, which is a central theme of Surrealism. Surrealists films differed from Dada ones by relying on more realistic (albeit never really realistic, at least compared to other movies of the time) visuals and conventional cinematography as a means to draw the viewer into their surreality.

Surrealists gravitated towards cinema as a genre that was “culturally illegitimate.” In the 1920s, the majority of the bourgeoisie considered cinema “dispargingly as middle-class, mass-entertainment”, not at all an art form.[5] Naturally, the subversive surrealists loved everything that went against the bourgeoisie, so they gravitated towards the films that were regarded as having the lowest artistic or intellectual value. These films were popular films (such as the comedies of Buster Keaton and Charlie Chaplin) and silent film serials from Hollywood, which they viewed as “unencumbered by a conscious artistic tradition.”[6] There, Surrealists thought, lied the collective unconscious of the time. Throughout all of this, though, they remained critical of the “commercial studio system of formulaic movies” and the movie stars of Hollywood.[7] Many of their films were aimed to offend proponents of what was considered artistic cinema, such as the Impressionist and avant-garde cinema of Dulac or Epstein.

By the late 1920’s, Surrealism had moved away from automatic writing and André Breton’s early definition of Surrealist expression as one that was necessarily “exempt from aesthetic or moral concerns.”[8] This shift allowed for the birth of Surrealist cinema, a medium that necessitates concern for aesthetics and the exercise of consciousness as part of the creative process. That is not to say that Surrealist cinema abandoned automatism completely. Surrealists at the time were using automatism as a writing technique, which created some problems. Few of these screenplays actually made it to production, as most were declared “unfilmable” for practical matters. Additionally, we often see in Surrealist cinema (as is the case with Un chien andalou) a flowing between one unconscious and the other, or rather, the lack of an identifiable unconscious entity, akin to the practice of changing authors in automatic writing, as in Breton and Soupault’s Les champs magnetiques. 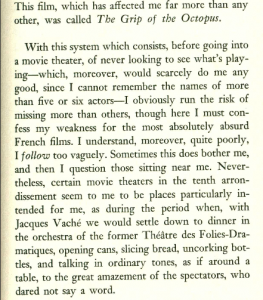 Much of how Surrealists made films was informed by how they engaged with cinema. Breton, for instance, had a habit of “dropping into the cinema when whatever was playing was playing, at any point in the show, and leaving at the first hint of boredom … to rush into another cinema where [he] behaved in the same way”.[9] In his novel, Nadja, Breton briefly mentions this behaviour (see excerpt image). Likewise, Man Ray would also enter a film screening “without even looking at the posters” and found the average film boring. He would used special “movie glasses”, prisms that allowed him to see films in colour and deconstruct the images into mere abstractions.[10] Both Man Ray and Breton much preferred absurd sequences of images to the traditional narrative structure. They resorted to their own methods of revolutionising the cinematic experience and transforming it from an expression of reality to a manifestation of what they considered a much more meaningful surreality. Naturally, when it came time to make their own films, these behaviours translated to the finished product.

The editing process was key in Surrealist cinema. Film allows the artist to distort time, with fast or slow motion shots, and scale. Superimpositions of shots, juxtapositions of incongruous images, stop motions, and fading all added the oneiric qualities of their films. This process was familiar to Surrealists, who used similar ‘editing’ mentalities when creating collages and objects. But film allowed them to go one step above these art forms, since it adds movement, sound and duration to the viewing experience. The viewer was immersed in an environment that, for the duration of the film, was completely dictated by the artist. According to Antonin Artaud, film was a language akin to painting and poetry, but provided a direct way for human expression, without “interpositions or representations.”[11]

Perhaps the most characteristic trait of surrealist films are their dream-like visuals and storylines. Surrealist filmmakers adopted the logic (or lack of logic) of dreams, creating films with pervasive and illogical sequences of images. Like dreams, these films had both a surface narrative and an underlying one, which was neither literal nor rational and resonated with the unconscious. Surrealist films can lead us to search for a plot where there is none. Un chien andalou is more akin to a collection of shocking images, but the audience is constantly being teased with the possibility of a narrative, via recurring characters and inter-titles that give some semblance of chronology. As we will see later, the real value in this film comes from the elements of the unconscious. This connection with the unconscious is what made surrealist film so revolutionary. Their films were “aimed at breaking open [the viewer’s] unconscious drives and obsessions.”[12] The point of surrealist films is not for the viewer to remember events, as one rarely does in dreams, but rather to impress them with certain feelings or ideas. Surrealist cinema is made all the more powerful considering the audience is familiar with the language of dreams, and are therefore well prepared to engage with these films. For that reason, Surrealists imagined a passive spectator, one who watched the films as they would experience their dreams, and as Man Ray and Breton had done — without any concern for logic or reason.

In 1925, Jean Goudal expressed the Surrealists’ enthusiasm and hope for film to become the ideal means for the realisation of surreality.[13] The art form allowed a new dynamism that could not be achieved in full with other art forms, like writing or painting. Surrealist films are a collective hallucination, a fusion of conscious and unconscious not possible in any other domain.[14] Unfortunately, the engagement of surrealists with film is rather limited. In his essay As in a wood, Breton expressed regret at the parsimonious use of cinema, and some, such as film scholar Rudolf Kuenzli, that “the whole history of Surrealism’s relation with cinema is, in reality, that of a great hope betrayed.”a href=”#_ftn15″ name=”_ftnref”>[15] Perhaps because filmmaking was expensive, or because of the difficulty of transferring the surrealist aesthetic to film because of technical limitations, the Surrealists of the 1920s left few films in their legacy.