Section I: An Overview of Surrealist Objects

Following the exhaustion of the depiction of the outside world in painting and photography’s success in performing the same function, the Surrealists turned their focus inwards to “consider nature only in its relationship with the inner consciousness” (Breton 1935, p. 260, 273). In addition to automatic writings, manifestoes, and photography, the Surrealists sought to achieve such a consideration of nature through Surrealist Objects. In this blog, we will analyze different aspects of Surrealist object theory, creation, and exhibition. First, we will briefly outline the types of Surrealist objects and the theories and methods used to create them, followed in the next section by a closer analysis of specific surrealist objects. Next, we will consider the dematerialized object by studying Man Ray’s objects. We will then discuss the political implications of Surrealist objects and why objects were selected as a medium for revolutionary discourse, and we will end with a discussion of how the Surrealists compiled their objects and presented them to the public.

Surrealists Objects as Manifestations of “Psychic Automatism in its Pure State”

In his Manifesto of Surrealism, Andre Breton offers a definitive definition of the Surrealist movement that crystallized the movement’s emphasis on the process of creation in place of aesthetic ideals: “Surrealism, n. Psychic automatism in its pure state… Dictated by thought, in the absence of any control exercised by reason, exempt from any aesthetic or moral concern” (p. 26). By de-emphasizing the quality of the work as defined by traditional aesthetic values and instead emphasizing the unfiltered thought that produced it, the Surrealists freed themselves of the constraints of societal ideals like “aesthetic or moral concerns,” enabling them to identify “previously neglected associations” that societal ideals inhibited (ibid, for a more in-depth discussion, see section V). Revealing such associations enabled a different interpretation of reality, one that better represented and unified with the inner reality of the mind, constituting the “superior reality” that the artists termed “surreality” (ibid; What is Surrealism?, p. 49). This uniting of the contents of the unconscious with the conscious perception of reality in this way can be found across the works of the Surrealists, including their Surrealist objects.

According to Dalí, the Surrealist object can be considered “an object which lends itself to a minimum of mechanical functions and is based on phantoms and representations liable to be provoked by the realization of unconscious acts” (Surrealist Situation of the Object, p. 276). In other words, the Surrealist object is not made to facilitate everyday life through mechanical function, but instead to materialize psychic automatism as a result of being produced by it (“the realization of unconscious acts”). By materializing the unconscious, Surrealist objects provide an outlet for the unconscious associations that are otherwise constrained by societal ideals enforced through “reason” and “aesthetic or moral concerns” as Breton puts it. Observers of the objects, then, are able to consider the representations embedded in the objects and themselves realize the limitations of societal ideals. Across the different categories of Surrealist objects, this revelation of “previously neglected associations” is accomplished differently, as the process of creating or discovering the objects differs. In sections below, we consider different types of Surrealist objects and how they manifest and expose unconscious associations in order to revolutionize the way the world is perceived.

Since its beginnings, Surrealism highlighted the dream as a potential solution to the inhibitions of conscious thought. In his Manifesto of Surrealism, Breton expresses his desire to sleep in order to “I would like to dream… in order to stop imposing, in this realm, the conscious rhythm of my thought” (12). By dreaming, Breton believed he could escape the restrictions on conscious thought experienced while awake. That is, the content of dreams is produced without the restrictions of reason or, as Breton later clarified, “conscious aesthetic or moral concern” (What is Surrealism?, 51). Therefore, dreams, and the objects found in them, contain unconscious associations and perceptions that can be made conscious upon being manifested in a dream. Beyond that, Breton posits that dreaming, and presumably exposure to and consideration of the content therein, would enable him to eliminate such restrictions after waking as well. The Surrealists, therefore, turned toward the dream as a source of revolutionary material that can be recreated and studied in order to alter the conscious pattern of thought and release it from the restrictions of “reason” imposed by society.

Later, while discussing an object encountered in a dream consisting of a book with a beared, wooden gnome as its spine, Breton suggests how he might be able to use this object to change others’ perspectives of the world around them:

It would be relatively easy to recreate it. I should like to put a few objects of this sort in circulation, for their fate seems to me to be eminently problematical and disturbing… Who knows – perhaps I would thereby… throw greater discredit on “reasonable” beings and objects. (Introduction to the Discourse on the Paucity of Reality, as translated in Surrealist Situation of the Object, 277)

Here, Breton supports the notion that dream objects like the gnome-book have the potential to motivate questioning the status quo by being recreated and shared with the public, who, upon observing the object, might begin to reconsider the “reasonable” beings and objects around them and question why they are considered “reasonable” in the first place. By recreating and publicizing the objects of their dreams, then, the Surrealists believed they could reveal the associations embedded in the objects’ composition and context and thereby revolutionize thought and perceptions of reality by challenging the role of “reason” in perceiving the world.

For one of our own dream objects, refer to Section VIII.

Often discovered in antique shops or flea markets, found objects were theorized to reveal associations by physically representing an association that has previously remained unconscious. Finding such an object was concerned subject to “objective chance,” described by Breton as being “That sort of chance that shows man, in a way that is still very mysterious, a necessity that escapes him, even though he experiences it as a vital necessity” (Nadja, p. 52; Surrealist Situation of the Object, p. 268). Although the driving force behind such chance remains mysterious, the function of the chance is clear: to expose aspects of reality that previously remained unconscious. Rather than being created through psychic automatism and manifesting unconscious associations in that way, found objects already encompass associations to be realized by the observer upon discovery.

The notion that the association embedded in found objects is previously contained in the finder, but not conscious, is supported by the Surrealist notion of convulsive beauty. This concept is mentioned several times throughout Surrealist works, particularly those of Breton, who describes the notion in his Mad Love:

Such a kind of beauty that will only be able to arise from the poignant emotion caused by the thing revealed, from the integral certainty brought about by the arrival of a solution which could not, on account of its very nature, have reached us by the normal logical channels. (as translated in Beauty will be Convulsive, p. 42)

Here, Breton defines convulsive beauty as the emotion felt upon the conscious realization of the solution to a problem that would not be accessible through rational thought, that is, thought conforming to what is considered reason in society. It is worth noting that this is the same thought that Breton excluded in his definition of Surrealism. Additionally, Breton suggests that due to this conforming to reason, conscious thought is limited in what it can conceive, precluding the conception of valuable solutions to issues in the real world.

The impetus for such a realization, moreover, can be found in the real world. Later in the same work, Breton clarifies that the pleasure of convulsive beauty is derived from the “lack of resemblance between the desired object and the object found,” adding that, “it alone has the power to enlarge the universe” (Mad Love, p. 13-15). In other words, the desired object, i.e. the sought or imagined solution to a problem, differs from the found object in such a way that the found object inspires a sensation of satisfying insight and revelation. Furthermore, by stating that such a discovery “[enlarges] the universe,” Breton posits that such revelation provides a new and more expansive perspective of life and the world (ibid). Combined with the notion that the found object is not reachable due to the limitations on conscious thought, this suggests that its discovery disaffirms such limitations and enables the finder to think and perceive consciously without their restrictions.

For one of our own found objects, refer to Section VII.

Whereas found and dream objects were either pre-existing creations or recreations of dream contents, the Objects Functioning Symbolically were created by a conscious artist, though they, too, took effect by stimulating an aspect of the viewer’s unconscious. In his 1931 essay “Surrealist Objects,” Dalí defines these objects as having “limited mechanical functioning but based on fantasies and representations that arise from subconscious acts” (425). In this sense, Dalí’s notion of an Object with Symbolic Function seemed to be inspired by Alberto Giacometti’s sculpture Suspended Ball, which can be analyzed in order to clarify the notion of Objects Functioning Symbolically.

Suspended Ball comprises a wooden ball with a crescent shaped cavity suspended with a thin string over a crescent. The short length of the string prevents the viewer from being able to slide the ball up and down, limiting the mechanical function of the object. The object brings forward 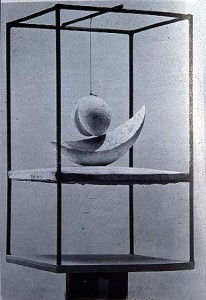 actions playing on the viewer’s subconscious, as the viewer may feel instinctively compelled to try and move the ball. This need to be a part of the object by touching it and interacting with it is addressed by Dalí, who defined Symbolic objects as objects that “fulfilled the necessity of being open to action by our hands and moved about by our own wishes” (ibid). Additionally, Dalí argues that we feel a sense of hunger to be an active part of the existence of these objects, as a result of which merely interacting with the object through our eyes is not enough (ibid). This sensation is reminiscent of Breton’s convulsive beauty, as it is not only a physical sensation, but it is one inspired by the realization, both physical and mental, of an unconscious association or representation. Considered as such, Objects Functioning Symbolically can be said to arouse repressed emotions and associations and enable the viewer to incorporate those associations in their conscious thought. In a revolutionary sense, the revealed associations may inspire the viewer to act and further pursue liberation of the mind, just as the Objects Functioning Symbolically invited the viewer to take action on them. Dalí’s most famous Symbolic Object comprising a shoe and glass of milk is discussed in the next section.

In the following section, we will further develop our interpretation of the categories of Surrealist objects with close analyses of some of the Surrealists’ own objects.