We launched this week with an exercise. In an effort to activate the problems of form and style at issue in our analytic readings this week (and to do so via the institution of the museum, so significant in Robin Coste Lewis’ “Voyage of the Sable Venus”), we walked out into an almost warm Spring afternoon and made our way over to the “Confronting Childhood” exhibition at the art museum. The assignment?

We allotted 30 minutes for all this.

Back in the classroom, a half an hour later, we did a kind of “Style-Slam” — ten super-quick presentations that brought out a variety of stylistic features within and across the works in the exhibition. Greg examined three different “hands” in the images, asking us to pay closer attention to the styles of gripping/touching/holding they indexed (I was reminded of the fact that George Kubler’s mentor/colleague Henri Focillion did a much-loved book on hands in art history). Ismael focused on the stylistic conventions of the gallery itself, and detailed the sutures where “rents” in the neutral, enveloping envelope of the gallery had been stitched up or bandaged over. Lisa powerfully evoked the gestural self-fashioning of (adolescent/juvenile) masculinity across four of the images; style seemed especially apt here. Jackie was particularly taken with a “punkiness” of gaze and posture, again looking particularly at figures in the liminal zone between child and adult.

For the most part the discussions focused on style in the synchronic sense, but both Jeff and I attempted more diachronic analyses: mine looked at 3 images (I reproduced them here below) and argued for an evolution in the “style” of coordinating the gaze and the gift in a series of images of what might be called “flower girls.” 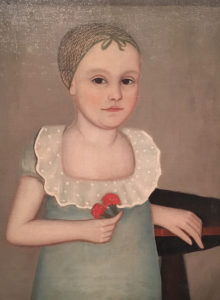 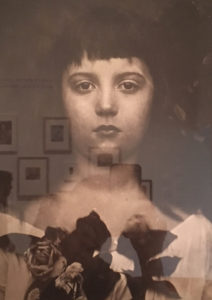 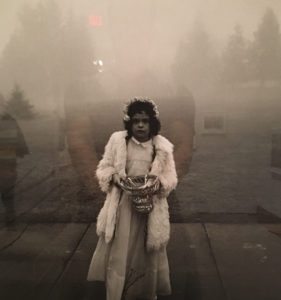 I discern in these three images something like the following sequence/problem: in the uppermost, the gaze and the flower are both “in the plane” of the image/canvas (they are neither offered nor withheld); in the middle, the Romantic move has been made, in which the gaze has receded into interiority, but the flower is proffered forth (as a substitute/consolation); in the “modern” image below, the gaze and the offering are again “in the same plane,” but both are essentially withheld in wariness (befitting the empty/paranoiac conjuncture of the twentieth century subject and its associated expression in material culture).

Jeff affectingly suggested that photographic portraiture inevitably thematizes its own (in-the-moment/all-at-once) temporality, but that it does so via a latent/dialectical fascination with asynchrony — as if the “unconscious” of photographic group portraits is perpetually manifest in the reliable return of an unrepressed sitter caught wandering out of the temporal frame. Blur was relevant here, and it was something Fyodor had already invoked in a different context. For Fyodor, the blurred subject spoke to photography’s clear propinquity to spiritualism — as if each ethereal softness at the edge of an arm or leg invoked the disembodiment of souls, the ghost-penumbra of those no longer present.

After all this we had a bit of discussion about what it had been like to attempt to use the language of style to group the works, to dissect them, and/or to “find a way” among them. I was left with the sense that the language of style is much more intensely a form of abstraction than I had perhaps previously realized. Which is to say, I found it difficult to get enough “away” from the works themselves to get traction on stylistic matters. Jeff rounded on the observation in the language of style itself: ours is a moment that privileges interpretation, and is therefore a good deal less adroit concerning questions of systematics/taxonomy than previous episodes in the history of criticism/learning.

Post-break we turned to our readings in good earnest, and more directly; though not until we had taken a few minutes around the room reading excerpts from (and discussing) our punctum exercises.

The prompt this week, recall, read as follows:

“‘This week we engage the historicity of form, of style, of things. For our punctum exercises, let’s try to engage ‘museological modes.’ Which is to say, go at your punctum via the texts, paratexts, architecture, and/or material culture of the museum. Let questions of form and style give onto time (and vice versa).”

I must say, after hearing your descriptions of a few of your projects (imagined exhibitions; Robin-Coste-Lewis-like ballads formed out of the text of your punctum-moment, sentences re-written to follow the corridors and galleries of exhibitions spaces, etc.), I am very much looking forward to reading the stack of papers here beside me on a chair.

I had fun myself this week. I, too, imagined an exhibition — and decided to evoke it through a form of stylistic pastiche: I wrote a (fictional) Artforum review of a contemporary art installation built out of my punctum. What was that phrase we used last week? “The ecstasy of self-reference as a mode of historical consciousness”? Yes, that was it. Hmmm. That may have gotten under my skin. Anyway, here it is: 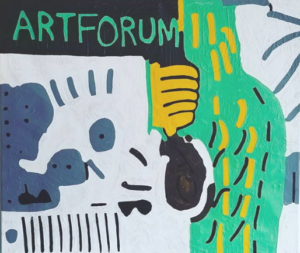 [the painting is Marlon Mullen‘s]

The most intense portion of the class, I thought, came at the end, when we really tried to hear and understand Lewis’s powerful poem. Of perhaps particular importance to the theme of our course was a discussion concerning the poem’s “procedure,” and its relationship to new ways of reading.

I never tire of pointing out the same basic thing: in the last twenty years, access to the historical record has gone from being an affair of laborious text-research in primary source documents mostly stored in research libraries and archival repository and accessible only to specialists, to being pervasively and universally available to pretty much anyone pretty much anywhere using data-intensive word search technologies.

The “manifold” of something like “the all” is now always in our pockets. This is weird, and it is very, very different from the relationship most people in most places have had to the documentary basis for history in its modern form. The implications for something like “historical consciousness” are, I believe, very large (and I am hardly alone in thinking this — though card-carrying historians spend less time on the matter than we might).

Robin Coste Lewis’s poem would have been, if not impossible, extremely difficult to make in the pre-internet world. Perhaps more significantly, it would have been absolutely impossible in that pre-internet world to read it as one can now read it — through Google. And reading it through Google turns the poem into an extraordinary multi-dimensional signpost, a powerful technology for navigating the past. Indeed, I would go so far as to argue, this kind of reading can make a text like this one into a new kind of history writing — one enormously important to our moment, and to the political questions very much upon us.

It was in reading the poem through google that we discovered the remarkable image/context/intertextual “backstory” trembling within the resonant lines that end “Catalog 7”:

reframing the past — I sell the shadow

to support the Substance Runway

The sense that this exercise could be extended to encompass every word of this work (for this was indeed how I read much of it — with my phone in hand, checking and checking) made for an extraordinary read, and succeeded in making me confront worlds upon worlds that had been invisible and silent to me. (Note that for the last word, “runway,” I probably spent an hour scouring different sources “looking for the work of art made-by/’containing’ a woman of color”; and I am by no means satisfied by the Perry Hoberman piece I found [though it seems to me quite impossible that a woman of color was not “in” this piece in some sense] — but I would argue that all of this deranging-manic seeking is exactly what the poem wants us to do/think/experience).

Upshot: This is a poem that has swallowed the hypertext. And asks us to swallow that swallowing. And to be changed by the communion. Here is Lewis in her “Epilogue”:

“History was the sea upon which I grew drunk.”

Which is a lovely and odd image (in that one cannot get drunk drinking seawater – one dies; so is the image one of vertigo? Or intoxication? Or both?)

If there was a hard question that hung in the room as we finished, it was, I think, the question of to what extent the poem can be read in an emancipatory key. Is it a singing of the archive, as I tried to suggest? Or is that too rosy? Is it bleaker than that, in its syntactical violence, its empty spaces, its way of repeatedly cornering itself with the brutality of racial oppression? Jackie pointed to a number of ways that the text seems unwilling to celebrate its own acts of recovery.

This is a major issue to confront in reading this poem. And the poem is interested in masks and masking in ways that make it reasonable to be cautious about deciding anything with certainty concerning its program: 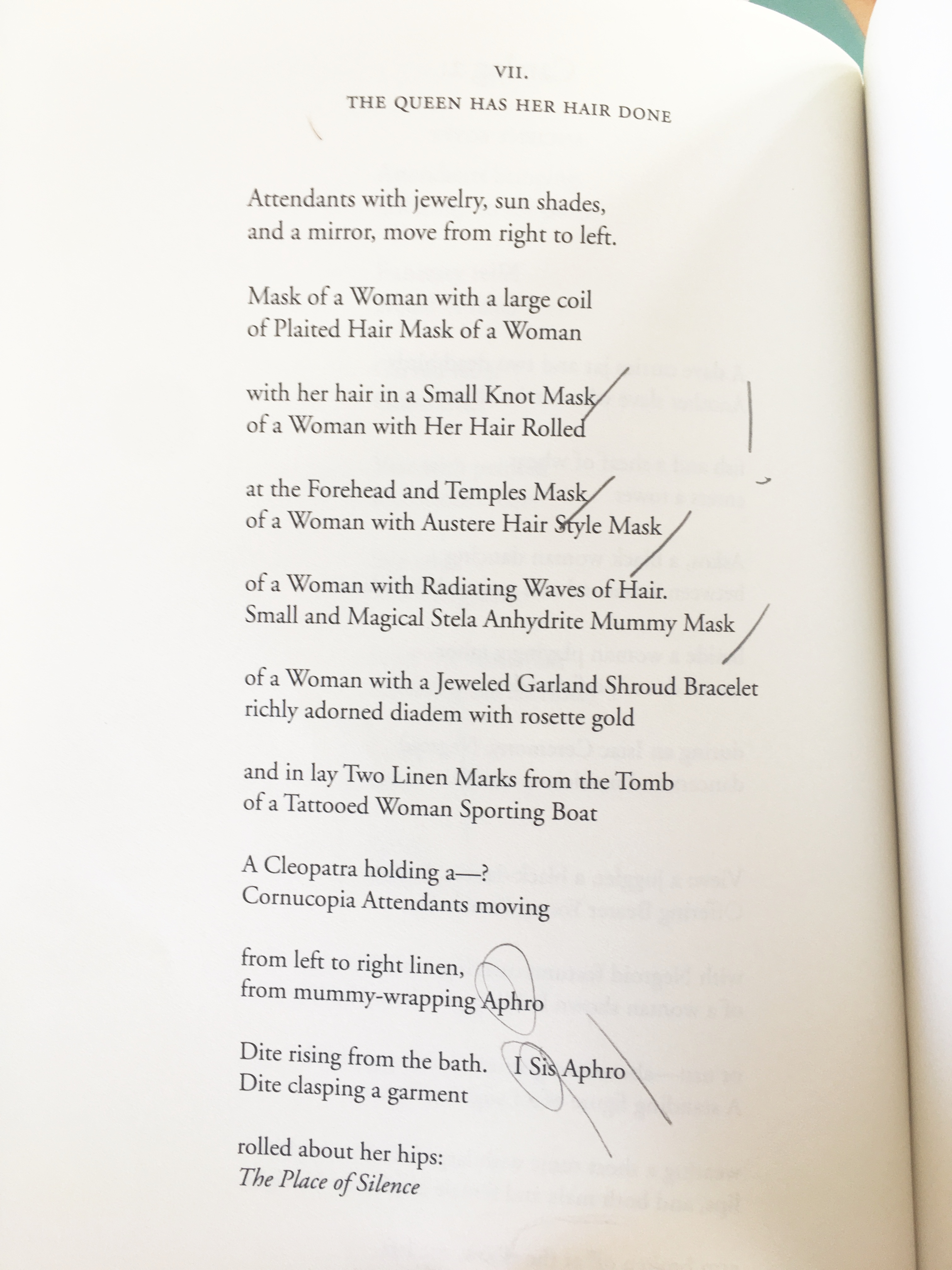 That said, I lean on the side of redemption, and offer you this in support of my inclination: 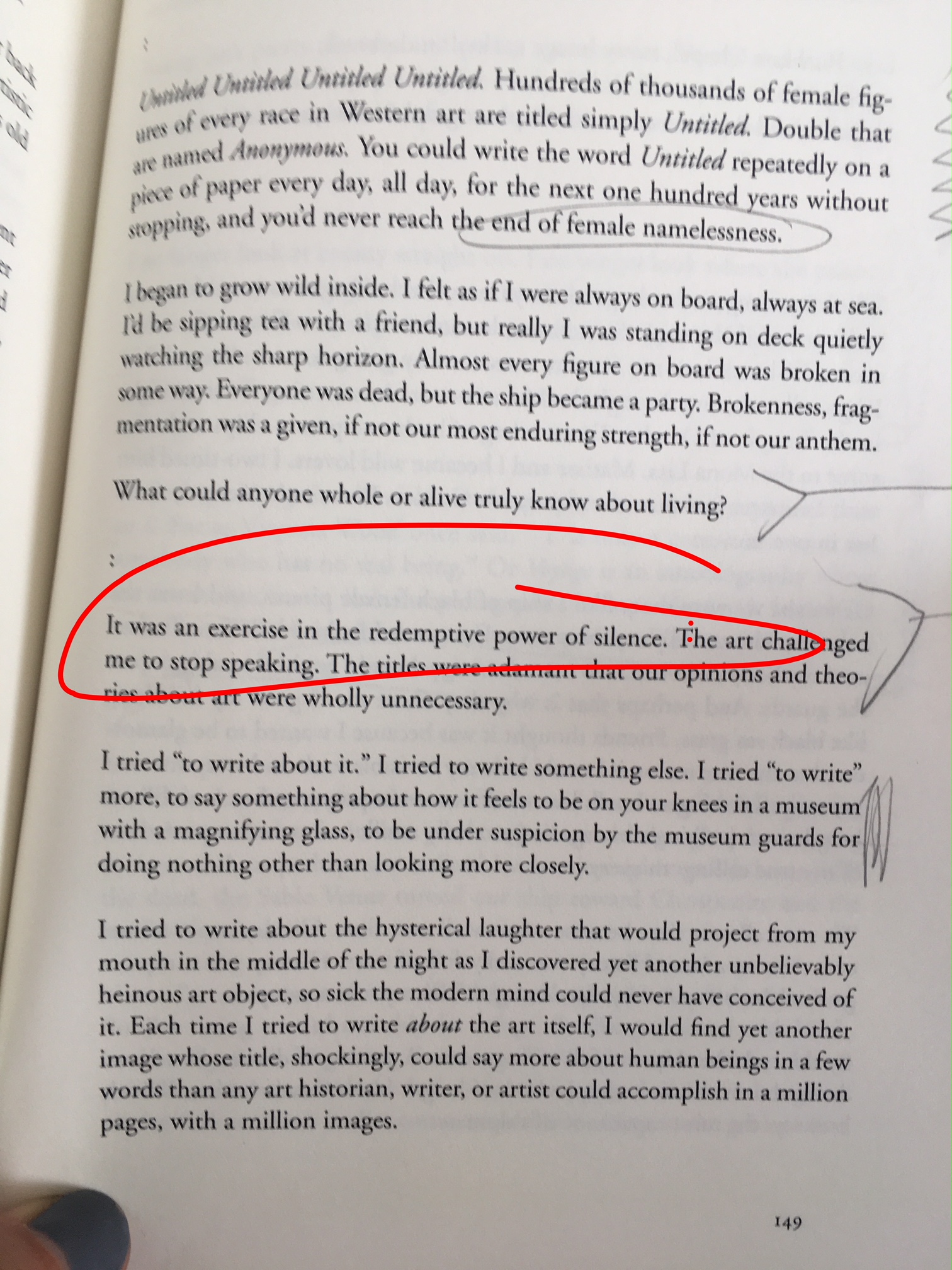 Not that it can be that simple. As I mentioned, Lewis may give us the figure of the conundrum in her own posture in the “Epilogue”: she is on her knees; in order to look at the (Black woman) in the work of art.

What would it be like to write some history on our knees?

I think of another poet, one cited several times by Lewis: Walt Whitman. And the extraordinary poem “The Wound Dresser”:

I onward go, I stop,

With hinged knees and steady hand to dress wounds…

Does the historical consciousness of our time require that the historian have “hinged knees”?