(This is our third post about the films of diplomat John Van Antwerp MacMurray. See the first post for more background.)

On February 24, 1928, MacMuray, his Chinese secretary, and a naval attaché started a six-week trip along the Yangtze (Yangzi) river to inspect consulates and ports between Tsingtao (Qingdao) and Chungking. MacMurray, who took his camera along, painstakingly listed the ships, ports, and towns he filmed in passing, as well as the treacherous rapids and gorges between Shasi and Kweifu (Yangtszelists.pdf). “This Upper Yangtze trip is the most beautiful I have ever made,” he wrote his mother on March 13. The three films that MacMurray shot aboard four ships are featured here. 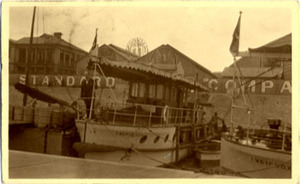 The only reference to the political context of the films is an inconspicuous boat that represented, according to MacMurray’s notes, the “American Consulate at Nanking, temporarily at Chinkiang.” Since its capture in March 1927, Nanking (Nanjing) had been the capital of the Nationalist Party, which was, by the time of MacMurray’s trip, in control of most of South China. During the trip, MacMurray met the Nationalist Party’s foreign minister Huang (Hwang) Fu, and negotiated a settlement of the “Nanking incident,” an outburst of anti-foreign sentiments during the capture of Nanking one year before. This would pave the way for the Tariff Treaty of July 25, 1928, which,  one month after the Nationalists took control of Peking, was a de facto recognition of the Nationalist regime of China.

Above: “The American Consulate at Nanking, temporarily at Chinkiang.” Photo printed on a postcard to MacMurray’s mother on May 13, 1928  (John Van Antwerp MacMurray Papers, box 26)

MacMurray’s first “Yangtsze” film begins with some brief footage in Tsinanfu, followed by outdoor scenes in Tsingtao, where administrator general Chao Chi (Zhao Qi) took MacMurray, who loved dogs, to a training session of police dogs (1:15). The destroyer USS Noa took MacMurray’s party to Shanghai, where they boarded the USS Isabel a few days later to sail to Chinkiang (Zhenjiang), and to Anking (Anqing). In Chinkiang the group paid a visit to Silver Island (Jiao Shan, 4:34), where MacMurray filmed temple scenes and a paper rubbing shop. At Chinkiang harbor MacMurray captured the Standard Oil house boat, mentioned above, where the American Consulate at Nanking was temporarily based (3:55). In Anking the party boarded SS Kungwo to Hankow (Hankou), where they were joined by Consul-General Frank Lockhart for the remainder of the journey to Chungking. The journey between Hankow and Chungking and back to Hankow (March 8-22) was traveled on river gunboat USS Guam with Admiral Yates Stirling, commander of the Yangtze Patrol. After passing Shashi and the Tiger’s Tooth Gorge, the film ends with harbor and street scenes in Ichang, where MacMurray and his party arrived on March 11.

The second Yangztze film documents the journey through the Yangtze Gorges on the upper river between Ichang and the city at the other end of the Gorges, known as Kweifu (now called Fengjie Xian). The footage ends with salt boiling at Kweifu (11:07) and some riverbank scenes with gondola-like boats that, according to MacMurray in a postcard to his mother, were native to Kweifu.

The contents of “Yangtsze III,” which continues the journey to Chungking, are not listed by MacMurray. During a stop, possibly at Wanhsien (Wanxian), MacMurray filmed the building of a boat, as well as some other riverbank scenes (2:54). The footage that follows includes a close up of MacMurray’s party with Admiral Yates Stirling (4:56), under whose command the USS Guam was sailing.

Upon arrival in Chungking the party apparently visited local warlord Liu Hsiang (Liu Xiang 5:40). Subsequent footage contains street scenes and the waterfront of Chungking. The Yangtze footage that follows was filmed on the way back to Hankow. It includes the Precious Stone Rock (Shibaozhai) in Zhong Xian, a steep natural rock with pagoda that was passed on the Northern river bank.