(This is our fourth post about the films of diplomat John Van Antwerp MacMurray. See the first post for more background.) 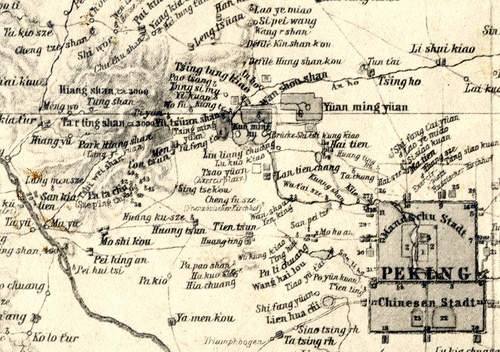 Detail of MacMurray’s German map of the Peking surroundings. The Pa Ta Ch’u valley, with Ta Pei Ssu, the temple rented by MacMurray (no. 41) is shown at the left of the center above Mo shi Kou.

To escape the heat and air of the city, diplomats in Peking (Beijing) spent their weekends and summers in the Western Hills, the hilly region to the northwest of Peking, where they often “rented a temple.” During his previous time in Peking as Secretary to the Legation (1913-1917), MacMurray expressed his love for the Hills in hundreds of photographs of the area’s temples and scenery.

When he returned in 1925, he focused his motion picture camera on people instead. In addition to family and friends, MacMurray filmed village and rural scenes during various trips in the Hills, where transport was often by donkey. MacMurray labeled the films himself, but did not provide any identifications. Some of the scenes are shot at Ta Pei Ssu, a temple in the Pa Ta Ch’u valley, where MacMurray and his family leased living quarters.

Lease of living quarters at Ta Pei Ssu for 1926-1927. The other half was kept by the temple’s administration (translation at TaPeiSsutransl.pdf).

The first film includes unidentified views and local scenes, villagers performing manual labor, donkeys and camels and their drivers, and views of the hills covered in snow. The footage also features a trip to the Ming tombs.

This film includes some family and temple scenes, probably at Ta Pei Ssu. In addition, the film includes street and village scenes, as well as footage of carriers, laborers, pig herders, and other villagers.

Miao Feng Shan (“Marvelous Peak Mountain”) was a popular pilgrimage site about 30 miles northwest of Peking. On October 23, 1928 MacMurray wrote his mother that the family was taking their guest, the artist Lilian (“Jack”) Miller, on a five-day trip in the Western Hills to Lung Ch’uan Ssu, Miao Feng Shan, Ti Shui Yen, and T’an Che Ssu. MacMurray must have shot this film during this trip. The film includes views of the Summer Palace northwest of Beijing, but the scenes following are not identified. The last part of this film seems to have been shot while climbing Miao Feng Shan.

The fragments on this reel include images of MacMurray’s children, Joan and Frank, and a guest riding donkeys in the Western Hills, possibly Lilian (“Jack”) Miller.

This brief film opens with camels and a camel herder, followed by a man who seems to be the storyteller at Chieh Tai-Ssu (a temple in the Western Hills), mentioned on the film reel label. The footage ends with a small boat being pulled across a stream.

2 thoughts on “Renting a temple in the Western Hills”