(This is our second post about the films of diplomat John Van Antwerp MacMurray.  See the first post for more background.)

On June 1, 1929, the body of Sun Yat-sen, leader of the Nationalist Party, who died and was buried in Peking (Beijing) in 1925, was reinterred in a new mausoleum in Nanking (Nanjing). The newly established Nationalist government invited the foreign diplomats in Peking (Beijing) to attend the ceremony. Two of the three films that MacMurray labeled “Peking I-III’ turn out to capture the trip to Nanking in the “ministers train” and back. Although MacMurray did not film the ceremony itself, “Peking II” includes rare footage of the procession of Sun’s body from his original burial place to the train station in Peking. The films below are shown in reverse order (III, II, I), as it appears MacMurray mis-numbered the films.

This film begins with scenes in Beihai Park in Peking, which include footage of soldiers, followed by local sites and scenes, including the Summer Palace. It ends with footage of who we believe is José Gallostra y Coello de Portugal, the secretary of the Spanish legation. During the train trip Gallostra drew caricatures of his colleagues, which he published in a satirical journal for French expatriates in Peking. 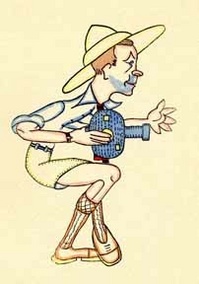 MacMurray, whose caricature is shown on the left, sent a copy to his chief Stanley Hornbeck, with the comment that Gallostra had a “genius for caricature and an irrepressible spirit of mockery” (19 July, 1929). In the film featured here, Gallostra, who is impersonating different characters, seems to be mimicking the prescribed behavior of the diplomatic representatives when paying their last respects to Sun Yat-sen. During a ceremony on May 31, prior to the reinterment, each minister placed a wreath at the foot of the dais at the headquarters of the Nationalist Party, where the embalmed body lay in state. The three bows while moving forward and backward can be found in descriptions of the ceremony. (Our thanks to Shuwen Cao, East Asian Library, Princeton University for clarifying this).

The second film in the series begins with village scenes in the Western Hills, where diplomats and their families spent much of their free time. The film includes footage of MacMurray and his family, probably at the temple Ta Pei Ssu, where they leased living accommodations. MacMurray filmed additional street and temple scenes, followed by a local fair and other village scenes.

After footage of MacMurray’s children in costumes, the film continues with the procession of Sun Yat-sen’s body passing by the Legation Quarter (Dongjiaominxiang) on its way to the Peking train station on May 26, 1929 (6:24). It is followed by the departure of the foreign representatives in the “Ministers train” on the following day (7:56). Close-ups include the French minister Damien de Martel (7:56) and the Dutch minister W.J. Oudendijk, doyen of the diplomatic corps, standing next to José Gallostra, who is drawing in a sketchbook (8:06). The film ends with a train stop at Taianfu.

The third film continues the previous footage on the Taianfu station and includes harvesting scenes that were filmed along the Jinpu railroad on the way to Nanking. The brief footage of Sun Yat-sen’s mausoleum (0:28) was shot prior to the funeral, as MacMurray did not film the official ceremony. This is followed by street scenes in Nanking, where MacMurray filmed silk thread making and other local scenes.

The footage after this seems to have been shot at the Nanking harbor (Xiaguan), as the train station in Pukou was on the other side of the Yangzi River (1:18). The next scenes were filmed during train stops on the way back to Peking and include the Lianghsiatien (Liangxiadian) station (the man in bathrobe (1:59) is believed to be Italian minister and author Daniele Varè), as well as agricultural scenes, and local musicians. The film ends with a children’s scene in the garden of the US legation in Peking.