(This is our sixth post about the films of diplomat John Van Antwerp MacMurray. See the first post for more background.) 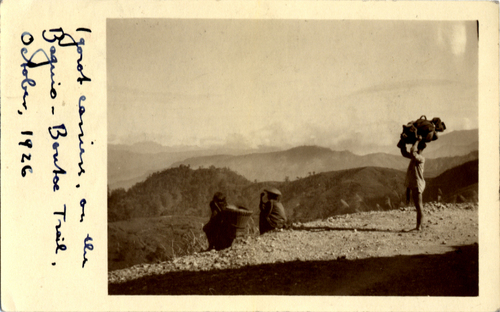 Photo of Igonot carriers, taken by MacMurray on the trail between Baguio and Bontoc (Oct 1926) and sent to his mother as a postcard  (John V.A. MacMurray Papers, box 26)
In the fall of 1926 MacMurray and his wife traveled through South China and to the Philippines, where they visited Governor General Leonard Wood in Manila and Camp John Hay in Baguio. A trip to Bontoc, where the MacMurrays stayed with governor John C. Early, became the highlight of the journey. Featured below is a film of this trip from Baguio to Bontoc. It contains rare footage of the local Igorots, who danced for MacMurray during a festival that Early organized in honor of his guests on October 9, 1926. The second film was shot during the boat trip from Shanghai to Hongkong, presumably preceding their visit to the Philippines. The last film that is featured contains footage of a trip to Nanking in 1929.

The film opens with footage that was shot along the trail from Baguio to Bontoc. MacMurray wrote his mother in detail about his visit to the Philippines on October 8 and December 12, 1926. A description of the Igorot festival on October 9 can be found In the second letter, which MacMurray wrote after he had returned to Peking and seen the film. His account of the dances that he filmed explains some of the footage. An old man, who was “a little drunk,” appeared in every dance, “whether of the seasoned warriors or of the maidens of the village.” MacMurray was impressed with the tact and consideration that the Igorots displayed when getting him out of the way. He also described a “particularly uprightly and engaging head-hunter,” who taught the “townsmen” the dance of another tribe, which he had recently seen.

A photo album of the trip to can be found in MacMurray’s papers (box 157). Descriptions of some of the photos may be found on postcards that he printed of the negatives and sent to his mother (box 26).

According to a list of scenes that was found among MacMurray’s reels (see SouthChinalistofscenes.pdf), the footage of this film was originally attached to that of a family vacation in Chefoo. Presumably, the film featured here covers the trip through South China that preceded the visit to the Philippines. It begins with lotus ponds at Hangchow (Hangzhou) and is followed by footage shot aboard a ship between the harbors of Shanghai and Hong Kong. In between both harbors MacMurray lists Amoy Harbor, Canton Harbor with the HMS Sacramento, and scenes along the West River, including a pagoda on the inner reach and the USS Pamfanga.

The trip to Nanking, during which MacMurray shot this footage, preceded his visit to Nanking to attend the reinterment of Sun Yat-sen on June 1, 1929 (see our previous post). The film begins with a brief train scene and footage shot aboard a boat, possibly across the Yangtze River between the train station at Pukou and Nanking. This is followed by shots of the new mausoleum for Sun Yat-sen, which appears not to be finished yet. The film ends with a train being guarded by a soldier, followed by men carrying luggage and people holding unidentified banners.