The Triangle Club Records at Mudd Manuscript Library are as rich and colorful as the history of the Triangle Club itself. Going back to 1883, when the theater troupe was founded as the ‘Princeton College Drama Association,’ the collection includes a wide range of records, from business correspondence and production files (including scripts and scores) to playbills and posters, scrapbooks, and photographs. In addition, there is a variety of audiovisual recordings, including phonograph records going back to 1924. The date of the oldest film footage in the collection, however, was only determined last week, when we were able to view the 16mm films in digitized format.

The first film shown here opens with a Hearst Metrotone newsreel, featuring Triangle’s famous "chorines" (members of the all-male chorus in drag), in a kickline for The Golden Dog, Triangle’s production for 1929-1930. The footage, presumably shot before Triangle started touring in December 1929, must have been attractive for Hearst Metrotone News, which had introduced sound to its movie theater newsreels only in September that year. For the University Archives the footage is of particular interest: The Golden Dog was performed during the opening night of McCarter Theater on February 21, 1930. Written and directed by A. Munroe Wade ’30 and Joshua L. Logan ’31 (who became a Broadway and Hollywood director and writer), the musical comedy was set in Quebec during the British siege of  the French and Indian War in 1759. The newsreel opens with John Metz ’30 as Sergeant Pierre DeLouche, joined by the chorines, who are dancing to the chorus of "Blue Hell" (lyrics by B. van Doren Hedges ’30 and music by Robert W. Hedges ’31). The text and music of the chorus can be found at Blue Hell score.pdf. 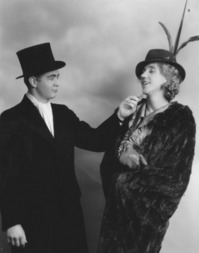 The footage that follows at 1:55, a trailer for a projected silent movie ("Park Avenue Cowhand"), was shot for Triangle’s annual production Take It Away (1936-1937). In this musical comedy three Triangle boys are going to Hollywood to advise Manny Magnum, president of ‘Pasteurized Pictures,’ about a movie version of Macbeth. Not knowing that Triangle is all-male, Magnum invites them to bring a female lead for the movie, and the boys decide that one of them, Chester Pipps (Alexander Armstrong ’37), will double as "Suzette Crepe." They are found out, however, when Magnum invites both Chester Pipps and Suzette Crepe to perform together in ‘Park Avenue Cowhand.’  The trailer is a clever montage of Pipps and Crepe (both played by Armstrong when their faces are visible), whose faces never appear in the same shot. However, the trailer was never used. It appears in a scene in an early synopsis of the play in which it is shown in a movie theater, but does not appear in the final script.
Above: Manny Magnum (Mark Hayes Jr. ’39) with Triangle’s "female lead" Suzette Crepe (Alex Armstrong ’37).

The footage featured here, found on a silent 16mm film reel that was labeled ‘Old Shots,’ shows kicklines from various Triangle shows in black and white and in color. The black and white footage, starting at 0:56, shows the chorines in Take it Away, discussed above (1936-1937). The subsequent color footage, presumably dating from the late 1940s and 1950s, has not been identified. Any Triangle alumnus who recognizes faces, outfits, choreography, or gams and can identify these shows, please leave a comment!

These 16mm films are part of the Triangle Club Records at the Princeton University Archives (box 177 and additions).  Mudd Library is thankful for the support that the Triangle Alumni Board provided for digitizing these films and unlocking their contents.