(This is our ninth and final post about the films of diplomat John Van Antwerp MacMurray. See the first post for more background.) 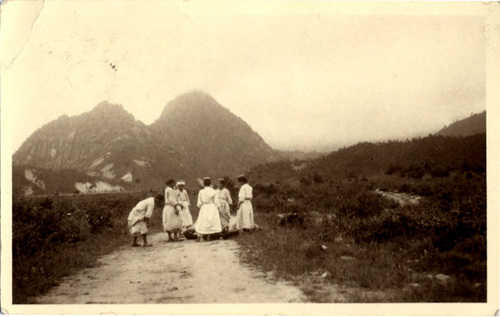 “A typical group of Korean women gossiping on the road near Onseiri.” Postcard to Henrietta V.A. MacMurray, printed from a photograph by MacMurray (Box 26, December 4, 1928)

This is the last post featuring the films that diplomat John Van Antwerp MacMurray made while serving as Minister to China from 1925-1929. The film “The Diamond Mountains, 1928,” which captures a family vacation in Korea in the summer of 1928, may be a fitting end: in the three preceding years MacMurray had seen the country that he loved come under the control of Chiang Kai-shek’s Nationalist Party, a development that he had watched with caution, as did many of his colleagues in the diplomatic corps. His thoughts about how to deal with the Nationalists differed from those of his superiors in Washington, which made his position increasingly difficult. On August 5, 1928, two months after the Nationalists took control of Peking, he wrote his mother about how much he and his wife were looking forward to the vacation in Korea. “Lois and I are feeling very “fed up” and stale and anxious to be away from things for long enough to take a fresh start.” The differences of opinion between MacMurray and his superiors, however, ultimately led to MacMurray’s resignation from his post in October 1929.

The family spent their vacation at one of the pools in the Diamond Mountains (Mount Geumgang, now North Korea), where they stayed in a hotel in the village of Onseiri in the Outer Kongo between August 17 and September 18, 1928. The film opens with family swimming, fishing, and mountain scenes, followed at 6:35 by brief footage of women on a street near Onseiri, also shown on the postcard above. The footage that follows of villagers and monks is assumed to be shot in the Choanji (Changansa) Monastery, which had the largest collection of temples in the Inner Kongo. MacMurray and his wife spent a few days there on their own, while their children were looked after at the hotel.

The John Van Antwerp MacMurray Papers contain photographs MacMurray made during his trips to the Diamond Mountains (Box 155-156), some of which he sent as postcards to his mother (Box 26). Apart from the first postcards, however, descriptions of the scenes are lacking. A film shot of a previous vacation in the Diamond Mountains in 1926, which was recently found, has not been digitized yet.
Previous posts about the films of John Van Antwerp MacMurray:

3 thoughts on “Escape to the Diamond Mountains in Korea, 1928”