President Lyndon B. Johnson visited Princeton University on May 11, 1966 to dedicate the new Woodrow Wilson School of Public and International Affairs building and receive an honorary degree. The new building had been made possible by a $35 million gift that was anonymous at the time, but later revealed to be from Charles S. Robertson ’26 and his wife Marie. (See the previous blog entry on the 1961 Princeton newsreel.)  Securing the visit of the President, originally scheduled in October 1965 but canceled at the last minute, had been very difficult. When the President did come, close to 400 Vietnam War protesters were kept a block away from the ceremonies. In his speech, however, Johnson addressed his critics nonetheless.

At the time of Johnson’s visit, student protests against the Vietnam War had only just begun. The local chapter of the Students for Democratic Society (SDS) was founded in the fall of 1965. In November seventy undergraduate and graduate students joined the “March on Washington to End the War in Vietnam,” defying Princeton’s conservative stereotype under a 10-feet long banner with the words “EVEN PRINCETON.” Opinions in Princeton at the time of Johnson’s visit, however, were mixed. Many supported Johnson’s policies in Indochina, including Princeton University president Robert F. Goheen. In September 1965 he joined the “Committee for an Effective and Durable Peace in Asia,” which consisted of 48 leading private citizens, whose purpose was to “support President Johnson’s proposals to bring about a viable peace in Vietnam and, once peace is brought about, to enlist economic aid for the entire area and to assure to the people of South Vietnam their right to choose a government of their own.”
By 1967 anti-war protests had increased throughout the country as well as in Princeton, which was particularly active in the draft resistance movement. Goheen, too, changed his mind and was one of the thirty-seven university presidents who signed a petition to end the American military involvement in Indochina. In April 1969, over 3,000 students, faculty, and staff assembled in Jadwin Gymnasium to vote on five resolutions related to the war. But it was after President Richard Nixon’s announcement in April 1970 that the United States had invaded Cambodia that the protests against the war peaked. The resulting “Princeton Strike” of 1970 will be the subject of a future blog post. 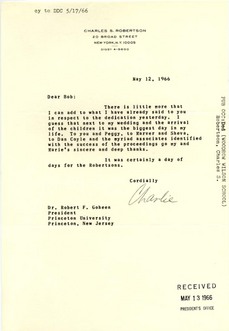 The text of Johnson’s speech is not available in the University Archives. A summary and discussion of his speech, however, can be found in The Daily Princetonian. What the records in the University Archives do reveal is how difficult it was to arrange Johnson’s visit. Less than than two weeks before the dedication it was still not certain if he could attend. A press release issued on May 8, three days before the ceremony, announced Secretary of Health, Education, and Welfare John Gardner as the principal speaker, but according to the Prince, rumors circulated that the President would attend.

The dedication brought a great deal of satisfaction to the then anonymous donors. “I guess that next to my wedding and the arrival of the children it was the biggest day of my life,” wrote Charles Robertson, who had suggested former Secretary of State Dean Acheson to Goheen as an alternative  on April 6. Although the donors of the $35 Million gift to the Woodrow Wilson School were anonymous, he and his wife appear to have been caught on camera as guests at the ceremony (1:04).
This newsreel is part of the University Archives’ Historical Audiovisual Collection (item no. 1339). Correspondence about the difficulties of scheduling President Johnson’s visit can be found in the the Office of the President’s Records (Box 386, folder 8 (which includes Robertson’s letter above) and folder 9) and the Office of Communication Records (Box 106, folder 2)