This Reel Mudd highlights a 1955 television pilot known as The Challenge. Intended to be the start of a weekly series highlighting controversial social issues, this episode was co-produced by the Fund for the Republic and noted TV producer Worthington Miner. This pilot shows the story of a school bus driver who is fired from his job and brought before the school board to justify his refusal to sign a loyalty oath.

The program’s co-producer, the Fund for the Republic, was an organization spun-off from the Ford Foundation. The Fund issued grants, commissioned studies, and created original works seeking to explore social issues such as racial discrimination, blacklisting, academic freedom, and the legality and effectiveness of loyalty oaths. As part of these activities, the Fund created a variety of documentaries and shorts for radio and television aimed at helping educate the American public about these issues.

The Challenge’s exploration of loyalty oaths mirrors the arguments raised in Fund for the Republic studies of the issue. It questions whether loyalty oaths were effective in their efforts to prevent Communists from subverting American institutions, whether they were constitutional, and if they led to additional rights or ethics violations.

While Miner and the Fund for the Republic initially had high hopes for selling this as a weekly series that would highlight controversial social issues, The Challenge had difficulty securing a network deal. After no buyers emerged, the film was consigned to a limited distribution amongst civic organizations, trade unions, church groups, and television stations affiliated with the National Educational Television and Radio Center. One civil organization that requested a copy of The Challenge was the American Civil Liberties Union (ACLU), which presented the program on a few additional local television stations with whom it had free air-time agreements. It is the ACLU’s copy that we present here.

At first glance, it seems strange that The Challenge struggled to be picked up by a network. The production team consisted of several notable figures. Producer Worthington Miner is credited with inventing many modern television tropes while at CBS, and discovering Ed Sullivan at NBC. Director Sidney Lumet was well known in the TV world, and went on to acclaim as director of Dog Day Afternoon, Serpico, The Wiz, and more. Of the writers, Rod Serling would achieve fame with The Twilight Zone, and Reginald Rose, already a noted television writer, would go on to create the critically acclaimed legal drama The Defenders.
So what went wrong? After the series’ rejection, Miner told United Press International that The Challenge was “too hot” for television because it didn’t “editorialize about the issues.” However, box 108 of the Fund for the Republic Records shows a more nuanced tale of the efforts to sell this program, along with the general difficulty of selling a television pilot. The Fund for the Republic invested approximately $40,000 in Miner, who shopped the pilot to NBC, Time-Warner, and CBS. In correspondence between the Fund and Miner, as well as various network executives, we see both criticism and praise of Miner’s team of writers, and expressions of concern about the content and controversy of the program. The correspondence also shows efforts to modify the show’s content or take strong stances on the ethical questions the show presents. Legal issues also appear, as memos show concerns about a 1951 Civil Rights themed film called The Challenge that jeopardized the series’ use of that title. 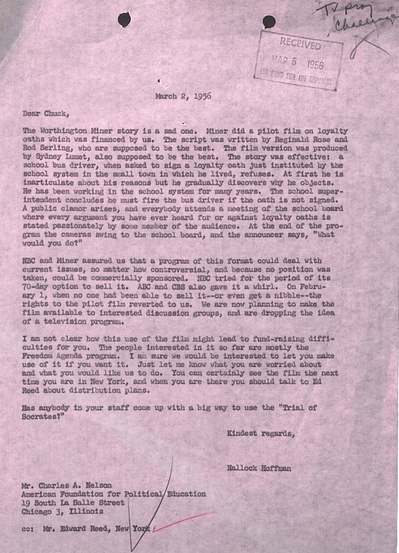 While The Challenge failed to reach mainstream television, this was not Fund for the Republic’s last effort to reach TV audiences. The fund went on to produce and sponsor a variety of documentaries, shorts, and educational programs such as the Academy Award nominated “A City Decides.” Rose and Lumet were not done with the ethical courtroom drama, either, creating a critically-acclaimed film adaption of Rose’s play Twelve Angry Men. Rose also went on to great success using a concept similar to The Challenge by exploring social issues through the frame of the legal context in The Defenders .
-John DeLooper
This 16mm film is part of the Audiovisual Materials Series of the American Civil Liberties Union Records (Box 2060).

1 thought on “The Challenge”