In a recent blog we shared our oldest film depicting President Hibben’s inauguration in 1912 and some unexpected footage of Woodrow Wilson. In today’s post we show you more surprise footage from that reel: commencement activities and P-rade scenes, most of which we had already found in a puzzling “film mosaic” on another reel. We now have identified the mystery footage as scenes from the class films of the Class of 1928. The footage from both reels is featured here, along with two reunion films that helped date the materials. Together the four films capture the commencement and reunion weekend of 1928, which included a particularly spectacular P-rade, when many classes were, according to the Prince, “decked in gaudy and grotesque costumes.”

As a bonus there is footage of the Class of 1928’s freshmen ‘flour picture’ from 1924–the first in many years in which only water and flour were used, which apparently made this hazing tradition too tame to survive–it was abolished in 1926.

According to the list of class films in the records of the Graduate Council, the Class of 1928 had three  film reels capturing their commencement, with some of the footage similar to the graduation film of the Class of 1921. The footage featured here contains only a few scenes, without the titles that originally accompanied them. The film, which is not in chronological order, opens at the end of the class exercises on Monday, June 18 with the breaking of the pipes on Cannon Green, which symbolized the breaking of ties with undergraduate life. The footage is followed at 0:22 by the commencement exercises on Tuesday, June 19, ending with the singing of “Old Nassau” (0:44). 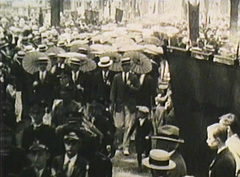 The film continues on Saturday, June 16 in front of Nassau Hall (0:54), where all alumni were waiting for the Class of 1928 to lead the P-rade. After the arrival of the 466 graduating seniors, carrying white umbrellas (1:04, left), the other classes would join in, beginning with the youngest. The footage at 1:16 shows various classes coming through the Arch at Prospect Avenue, from where the procession proceeded to University field. 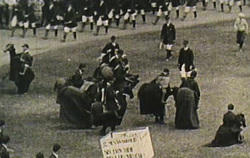 From 1:30 the procession is seen marching around the baseball field, prior to the traditional game against Yale. The cameraman zoomed in on classes with particularly interesting costumes. These include what is thought to be the Class of 1918 with feather hats (1:39), and an unknown class (possibly the Class of 1912) acting out a fox hunt (1:59, right). The film ends with footage of presumably the Class of 1928’s last Senior Singing on the steps of Nassau Hall (2:19), with the seniors traditionally dressed in white.

The footage on the second film includes fragments from the first film (sometimes duplicated) for a “mosaic” that was probably used for a reunion. The mosaic includes some additional P-rade scenes, including a class dressed up as fakirs, charming a huge snake (3:43). 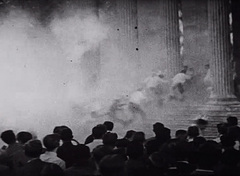 The P-rade scenes are mixed with footage of what is believed to be the Class of 1928 ‘flour picture,’ copied from the class film of the Class of 1925, which did not survive. This first group photograph of a newly arrived class was taken on the steps of Whig Hall after the freshmen had been pelted with flour by sophomores (1:08). As explained in a previous blog, the hazing ritual had become vulgarized in the early 1920s, when students used noxious ingredients in addition to flour. In 1923 the mix even included acid, which caused the Senior Council to abolish the tradition. This created such an uproar among students that the Senior Council resigned and a new one was chosen, which immediately reinstated the flour picture. Only water and flour were allowed, however, and sophomores, who were barred from the inside or roof of Whig Hall, were held fully responsible.

With the new restrictions in place, the tradition apparently lost its appeal; according to the Prince, not many sophomores showed up. When a year later, during the Class of 1929’s flour picture, the new sophomores did not show much interest either, the ritual was abolished after all.

This film, shot by  George O. Linkletter ’02 and donated to the Archives by his grandson, captures the P-rade from the Class of 1928 to the Class of 1912. The footage allows us to view the younger classes in their costumes up close, including jail uniforms (0:35), German lederhosen (0:43), and the Class of 1920’s chefs costumes (0:49).

The footage that follows (1:32) shows the procession going around the baseball field, and the traditional run for the seats by the graduating seniors. The film ends with footage of the Class of 1902’s 25th reunion in 1927 (3:38).

The last film featured here, which is annotated, captures the Class of 1888’s 40th’s reunion. The footage of the P-rade is similar to the previous reunion film, but shows a few different classes in costume. The film concludes with a class gathering on Sunday afternoon at the residence of Charles F. McClure, a Princeton biology professor, who was a member of the class.

3 thoughts on “Commencement and reunions in 1928, and Princeton’s penultimate flour picture”