The 1964-1965 basketball season was an unprecedented season of success for the Princeton men’s team as it played some of the finest basketball in the country, led by All-American and captain Bill Bradley ’65. During that magical season, the Tigers won the Ivy League title and earned a trip to the NCAA tournament. By season’s end they had bested teams from Navy, Syracuse, Rutgers, Cornell, and Providence. Bradley, arguably one of the best athletes ever to play at Princeton, led a talented group of juniors and up-and-coming sophomores as they demonstrated that an Ivy League team, devoid of scholarship players, could hold their own, and indeed, compete with basketball powerhouses such as Michigan and North Carolina State.

Princeton’s season opened on December 2nd with an 83-74 victory over Lafayette College. Crowds filled Dillon Gymnasium to watch the team, and as the end of December approached, Princeton was 6-2. Then at New York City’s Madison Square Garden (2:34), where the annual Holiday Festival tournament was played, Princeton opened with a victory over Syracuse. But the match-up everyone was anxious to watch pitted Princeton against the University of Michigan — then the number one ranked team in the country. Michigan’s star player was Cazzie Russell, a versatile 6’ 6” all court player.

The first half was a fairly evenly matched contest, with Princeton securing a 39-37 half time edge. During the second half, Princeton opened up a significant lead. With four and a half minutes to go, the Tigers lead by 12 (4:52). But, the game quickly turned when Bradley was called for his fifth and final personal foul — a costly error that sent him to the bench for the remainder of the game. Without their floor genera 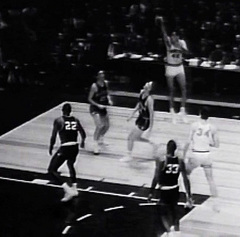 l, Princeton struggled to find its rhythm, but managed to keep things close. With less than a minute to play, they still led by two points. In the waning seconds (6:08), Michigan put the ball in Russell’s hands, and he did not disappoint, nailing the winning shot which gave Michigan an 80-78 victory. It was not the last time that these two teams would meet during the season. Nor would it be the last time that Bradley and Russell would compete together. Both played on New York Knicks teams in the late 1960s. (The Daily Princetonian, January 5, 1965)
Successful teams are rarely made by heroics or skills of just one player. Bradley was coached by Butch van Breda Kolff ’45 (pictured below left). During his tenure from 19 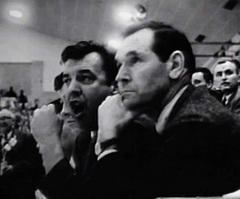 62-1967, van Breda Kolff posted a 103-31 record, claimed four Ivy League championships, including three in a row, and took a team to the NCAA Final Four tournament. Van Breda Kolff’s teams were known for their strong defensive play and relied heavily on man-to-man defending. Deft ball handling skills, movement off the ball, and fast breaks were keys to his offensive strategy.
Bradley, a true team player, was linked with a promising group of sophomores and two contributing juniors (6:38). He could count on Robbie Brown ’67 for rebounding, Gary Walters ’67 to handle the ball and defend, while Ed Hummer ’67 added additional defensive skills. Bob Haarlow ’66 and Don Rodenbach ’66 shared the scoring burden as backcourt players.  (The Daily Princetonian, January 22, 1965) 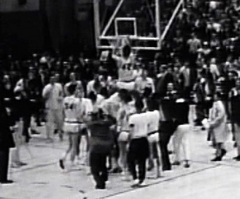 When Princeton welcomed Cornell University to an excited and crowded Dillon Gymnasium on February 27, 1965, the Ivy League title was at stake (10:21). Princeton was also eager to avenge a January loss to Cornell. The gym was packed to the rafters with 3,250 fans; another 1,700 watched the game via closed circuit television on campus. When the final buzzer rang, Princeton had won its third consecutive Ivy League basketball title, defeating Cornell 107-84 (13:52). In the thirty-three minutes that Bradley played he scored 33 points. Fellow Tiger players carried both him and their coach off the floor in jubilation. With the victory, Princeton had earned a spot in the NCAA post-season tournament. (The Daily Princetonian, March 1, 1965)
The NCAA tournament, often referred to now as “March Madness,” was a much smaller affair then, as only 23 teams vied for the national title (16:10). Princeton opened against Penn State in a game that was much closer than Tiger fans would have liked. Princeton squeaked by, thanks to Bradley’s second half contributions, with a 60-58 victory. They next faced North Carolina State University and defeated them more easily, earning a 66-48 win. 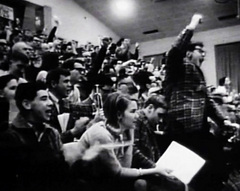 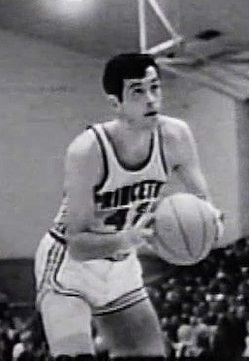 The next day the team was back on the court, as they faced Wichita State in the national consolation game. Bradley let loose, scoring 58 points — an individual scoring record that still stands at Princeton — as he led his team to a 118-82 victory. In the process he earned the most valuable player award of the tournament. (The Daily Princetonian, March 22, 1965)
The Tigers finished the season with a 23-6 record. Bradley — the All-American, the team captain, the Olympian — had dazzled fans, both with his quiet, gentlemanly manner, and his superb basketball skills. At the close of the season, the Princeton men’s basketball team was the third best team in the county, and the pride of the campus community. It had truly been “The Year of the Tiger.”
-Kristen Turner
This KSP-60 U-matic video, produced by the Alumni Council of Princeton University, is part of the University Archives’ Historical Audiovisual Collection (item no. 1577). All images are stills from the film featured here.