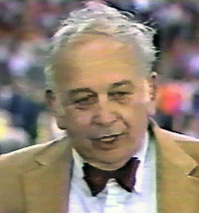 Princeton played solid defense throughout the game, but what changed for them in the second half was their inability to get rebounds. In the first half they out-rebounded Georgetown, but in the second half the Tigers struggled on the boards. At one point, Georgetown had 17 rebounds to Princeton’s one.

The game seesawed for much of the second half, with Princeton keeping it close. With 1:38 remaining and the game tied, the crowd, now solidly behind the Tigers, sensed an upset in the making. With 0:23 seconds to go, Scrabis fouled Mourning, sending him to the line for a crucial one-and-one. The freshman, facing enormous pressure, made the first shot but missed the second. Scrabis pulled down the rebound and with 0:18 seconds, Princeton brought the ball down court, trailing by only one point, 49-50.
Following a time out, Princeton inbounded the ball at mid-court. Scrabis’ shot was blocked by Mourning. After a scramble for the ball and with one second remaining, Princeton, still down by only one point, inbounded the ball from the sideline. Kit Mueller’s shot at the buzzer missed, and Georgetown escaped by the narrowest of margins, 50-49. 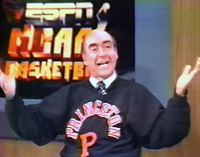 Back in the studio Vitale appeared in a Princeton sweatshirt and all the talk in the basketball world for a while was of the near upset. Despite the loss, the result of the game was a proud moment for Princeton basketball, as it demonstrated that it could play with the best of them.

The VHS tape capturing this footage is part of the University Archives’ Historical Audiovisual Collection (item no. 1497). Images are taken from this tape. Additional commentary may be found in the Daily Princeton of March 20, 1989.

7 thoughts on “Men’s Basketball — Princeton vs. Georgetown, 1989: Who does not like a David versus Goliath matchup?”