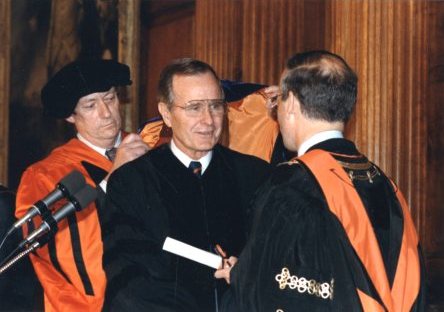 Bush Receives his honorary degree from President Shapiro *64.
Historical Photograph Collection, Individuals Series, Box MP2
But, this ceremony was not without controversy, including the publication of an open letter signed by hundreds of students who objected to the awarding of honorary degrees to Bush and Secretary of State James Baker (Daily Princetonian, Volume 115, Number 64, 10 May 1991). Furthermore, a crowd of approximately 250 protestors, including the “George Bush Reception Committee” gathered during the visit to protest issues including the Persian Gulf War, Bush’s veto of the 1990 Civil Rights Act, Presidential treatment of HIV/AIDS victims, and the nature in which Bush’s degree was awarded.
Invitation to Bush’s speech (left) and flyer advertising the protest (right)
Historical Subject Files, box 309
In fact, the awarding of Bush’s honorary degree was an unusual event. While US Presidents often receive honorary Princeton degrees, and Bush was the 17th President to receive this award, President Bush’s visit and degree granting occurred on May 10, several weeks before the traditional awarding of honorary degrees that occurs in conjunction with Commencement. This ceremony was especially extraordinary since Bush’s honorary Doctor of Laws was the first degree to be awarded outside of Commencement since Lyndon Johnson received his L.L.D. in 1966 (see, and the ceremony was also conducted in a closed-door gathering in the Faculty Room at Nassau Hall, instead of the usual grounds outside that building. 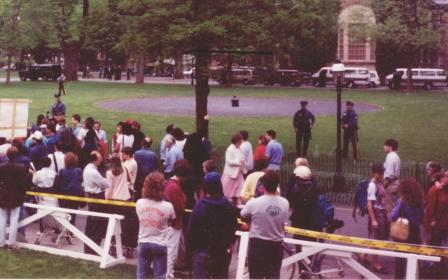 Anti Bush Protestors. Historical Photograph
Collection, Campus Life Series, Box SP9
Aside from President Bush, several other notable individuals gathered to celebrate this occasion, including Governor James Florio and former Princeton Presidents Robert Goheen and William Bowen. The conferring of the degree included a variety of speeches from individuals including Edmund H. Carpenter II ’43 (00:07:15) and James A. Henderson ’56 (00:04:20), while the Dedication of the Corwin-Bendheim-Fischer Complex included speeches from among others Governor Florio (00:36:54), Dean of the Chapel Joseph C. Williamson (00:36:57), and President Harold Shapiro (00:39:43).
The film was originally broadcast on the C-TEC cable channel and hosted by Princeton’s Andrea Diehl (Assistant to the President) and Nick Morgan (Director of Development Communications). Lasting about an hour and twenty six minutes, it also includes scenes such as Bush’s arrival via Marine One (0:00:10), the conferring of the degree (0:08:45), the Presidential dedication speech at the Social Sciences Complex, and interviews with Representative Dick Zimmer (1:14:57), and Princeton Borough and Township mayors Marvin Reed and Richard Woodbridge  (1:19:14).
More information, along with photographs concerning Bush’s visit can be found in:
Historical Subject Files Collection
Daily Princetonian Larry DuPraz Digital Archives
Office of Communications Records
Historical Photograph Collection: Campus Life Series
Historical Photograph Collection: Individuals series
Progressive Review Subject File

4 thoughts on “A Princeton Degree For a Yalie: George H.W. Bush Visits Princeton, 1991”