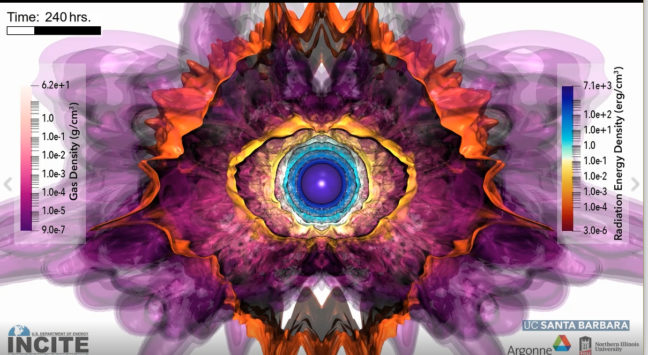 New, three-dimensional simulations reveal the inner workings of one of the universe’s most mysterious stars.

Sparkling with an exceptional blue-toned brilliance and exhibiting wild variations in both brightness and spectrum, the luminous blue variable (LBV) is a relatively rare and still somewhat mysterious type of star.

Video courtesy of the University of California-Santa Barbara

Its appearance tends to fluctuate radically over time, and that has piqued the curiosity of astrophysicists who wonder what processes may be at play.

“The luminous blue variable is a supermassive, unstable star,” said Yan-Fei Jiang, a researcher at the University of California-Santa Barbara’s Kavli Institute for Theoretical Physics (KITP) who earned his doctorate at Princeton University in 2013.

Jiang is the first author on a new study published in the journal Nature this week. The paper’s senior author is Princeton’s James Stone, the Lyman Spitzer Jr., Professor of Theoretical Astrophysics, Stone, a professor of astrophysical sciences and applied and computational mathematics, and the chair of Princeton’s Department of Astrophysical Sciences. Jiang and Stone developed the numerical code used in the study.

Unlike our own comparatively smaller and steady-burning Sun, LBVs have been shown to burn bright and hot, then cool and fade so as to be almost indistinguishable from other stars, only to flare up again. Because of these changes, conventional one-dimensional models have been less than adequate at explaining the special physics of these stars.

However, thanks to special, data-intensive supercomputer modeling conducted at Argonne National Laboratory’s Argonne Leadership Computing Facility (ALCF) for its INCITE program, Jiang and colleagues — Matteo Cantiello, a visiting associate research scholar in Princeton’s Department of Astrophysical Sciences, and an associate research scientist at the Simons Foundation’s Flatiron Institute; Lars Bildsten of KITP; Eliot Quataert at UC Berkeley; Omer Blaes of UCSB; and Stone of Princeton — have now developed a three-dimensional simulation. It not only shows the stages of an LBV as it becomes progressively more luminous, then erupts, but also depicts the physical forces that contribute to that behavior. The simulation was developed also with computational resources from NASA and the National Energy Research Scientific Computing Center.

Of particular interest to the researchers are the stars’ mass loss rates, which are significant compared to those of less massive stars. Understanding how these stellar bodies lose mass, Jiang said, could lead to greater insights into just how they end their lives as bright supernova.

Among the physical processes never before seen with one-dimensional models are the supersonic turbulent motions — the ripples and wrinkles radiating from the star’s deep envelope as it prepares for a series of outbursts.

“These stars can have a surface  temperature of about 9,000 degrees Kelvin during these outbursts,” Jiang said. That translates to 15,740 degrees Fahrenheit or 8,726 degrees Celsius.

According to Jiang, in a one-dimensional stellar evolution code, helium opacity — the extent to which helium atoms prevent photons (light) from escaping — is not very important in the outer envelope because the gas density at the cooler outer envelope is far too low.

The paper’s co-author and KITP Director Lars Bildsten explained that the three-dimensional model demonstrates that “the region deep within the star has such vigorous convection that the layers above that location get pushed out to much larger radii, allowing the material at the location where helium recombines to be much denser.” The radiation escaping from the star’s hot core pushes on the cooler, opaque outer region to trigger dramatic outbursts during which the star loses large amounts mass. Hence, convection — the same phenomena responsible for thundercloud formation — causes not only variations in the star’s radius but also in the amount of mass leaving in the form of a stellar wind.

Additional work is underway on more simulations, according to Jiang, including models of the same stars but with different parameters such as metallicity, rotation and magnetic fields.

“We are trying to understand how these parameters will affect the properties of the stars,” Jiang said. “We are also working on different types of massive stars — the so-called Wolf-Rayet stars — which also show strong mass loss.”

This story was provided by the University of California-Santa Barbara.

This research was supported in part by the NASA ATP grant ATP-80NSSC18K0560, the National Science Foundation under grant number NSF PHY 11-25915, 17-48958, and in part by a Simons Investigator award from the Simons Foundation (to E.Q.) and the Gordon and Betty Moore Foundation through grant GBMF5076. An award of computer time was provided by the Innovative and Novel Computational Impact on Theory and Experiment (INCITE) program. This research used resources of the Argonne Leadership Computing Facility and National Energy Research Scientific Computing Center, which are DOE Offices of Science User Facility supported under contract DE-AC02-06CH11357 and DE-AC02-05CH11231. Resources supporting this work were also provided by the NASA High-End Computing (HEC) program through the NASA Advanced Supercomputing (NAS) Division at Ames Research Center. The Flatiron Institute is supported by the Simons Foundation